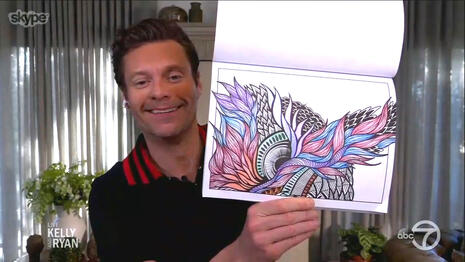 Shockingly, there isn’t some slavery or Jim Crow era connection making the origins of coloring books racist or further evidence of white supremacy. No, Slate revealed to doodling adults that coloring books were made for children – GASP – to teach them to behave!

Adult coloring has become a popular pastime in recent years, especially, it seems, with fragile snowflakes needing safe spaces in the wake of President Trump’s election. With the coronavirus lockdowns, adults are turning to coloring books as a form of art therapy even more.

Lugli wrote of turning to coloring to “give life to my hopes for socialization and travel and can make my broken world seem whole, even if it’s just on the page, just for one moment.” But, what at first seemed like a comfort, began to give him pause:

As I buried myself in these projects, my thoughts eventually darkened, for reasons that may be familiar to anyone with some art-history training. What if the recent popularity of coloring books comes not from the creativity they purportedly inspire, but from the submission they induce? This, after all, has been their mission from the start. It may be lost to the fans of coloring books that their success peaked in the 19th century, when such publications taught children how to behave. And obedience seems to be what many of us crave in these pandemic days.

He worries that the children’s activity that he engages in today is meant to enforce conformity and good behavior because a coloring book from the 1880s literally taught moral lessons to kids.

The Little Folks Painting Book—often described as the first coloring book—invited one to paint the illustrations of songs and tales about the harms of waking up late, being selfish, or playing a trick on your well-mannered cousin. The last story of the book is particularly revealing. It is about a brother and sister who wish to fly away from their boring, secluded life and are magically held captive on flying carpets that take them on a journey that never ends, a Dantesque hell of punishment that comes with the warning: “Never be discontented, never wish for anything you cannot have.” Doesn’t this sum up what coloring books are about: Stay within the lines?

So, coloring books are infantilizing, encouraging compliance and obedience. Maybe that’s just another reason they’re meant for kids and not for men who want to regress to a child-like state to escape reality.

But beyond guiding personal behavior, the act of coloring has implications for global politics. Lugli wrote of “Henry Peacham, author of The Compleat Gentleman of 1622, perhaps the first book to advertise the benefits of coloring:”

He promoted coloring as a way to accept a world assembled by rulers, and not just accept it but to yearn for it and delight in its preservation. Coloring was for him, as it was becoming to me, a means to maintain the political status quo.

To color is to inhabit a world designed by others, to dwell in an environment where you are left with no options but to memorize what is already there. …

Well, that’s the last straw, you can’t be a good member of the resistance if you color. It dulls creativity and promotes acceptance, Lugli found, “dimming my capacity to imagine how a future can be conceived and built.”

It took a crazy path to get there, but at last forces on the left are coming to the conclusion that the right has instinctively known all along: Adults need to grow up and not indulge in children’s activities like coloring.