Gitmo Prisoner Is Innocent Victim of Islamophobia on 'NCIS' 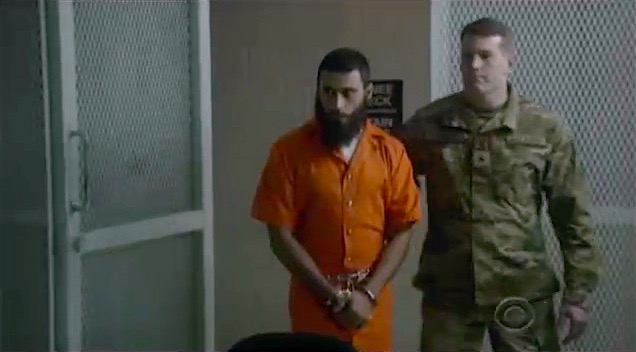 While investigating the murder of a Muslim chaplain who once served at Gitmo, in the episode “Enemy Combatant,” the NCIS agents discover evidence that one of the detainees he counseled was an innocent man. It turns out that Amir Hassan was just in the wrong place at the wrong time, but those eeeeeevil defense contractors (surprised they didn't name drop Blackwater!) edited the transcripts of his interrogation to make him look guilty because they “were told to help prolong the confinement of detainees who refused to produce Intel vital to the War on Terror.”

NCIS Agent Ellie Bishop (Emily Wickersham) and translator Qasim Naasir (Rafi Silver) go down to Gitmo to talk to Hassan. Bishop worries Hassan won’t talk to her because “this place taught him not to trust anyone, especially U.S. Agents.” Hassan tells her, “I was put in this place by people like you, Agent Bishop. People who think I'm a terrorist because I'm Muslim.” Ah, yes, Gitmo is about Islamophobia, not terrorism.

After Amir Hassan is freed, Bishop regrets her past work at the NSA to put terrorists in Gitmo and wonders “if there's another Amir in there.”

Bishop: Amir Hassan was right. I have sent people here. For years, I've... I've known about Gitmo and I've talked about it, but... (Sighs) ...Seeing it, it's not what I expected.

Qasim: What did you imagine?

Bishop: I don't know. I know there are people detained here who have done horrible things, but... This doesn't feel like justice.

Qasim: Well, fear often makes us do things that we shouldn't. But that's human.

Bishop: What if there's another Amir in there and we just don't know it? He was a 22-year-old kid. And we took away 11 years of his life. Can't ever make that right.

Qasim: Believe me... That is everything.

This episode comes at the perfect time for President Obama as he feverishly works to release all terrorists from Gitmo by the end of his term. How helpful for CBS to push the propaganda that Gitmo is corrupt and its detainees could be innocent. Meanwhile, as of August 15, 2016, there are only 61 terrorists left at Gitmo, down from 242 when Obama took office. These are the worst of the worst, not people who were mistakenly swept up and kept because of translation edits. And, of the terrorists who have been released, 30 percent have taken up the jihad against America again.

But, yeah, CBS, let’s create a liberal fantasy land where the only thing Gitmo terrorists are guilty of is being Muslim.