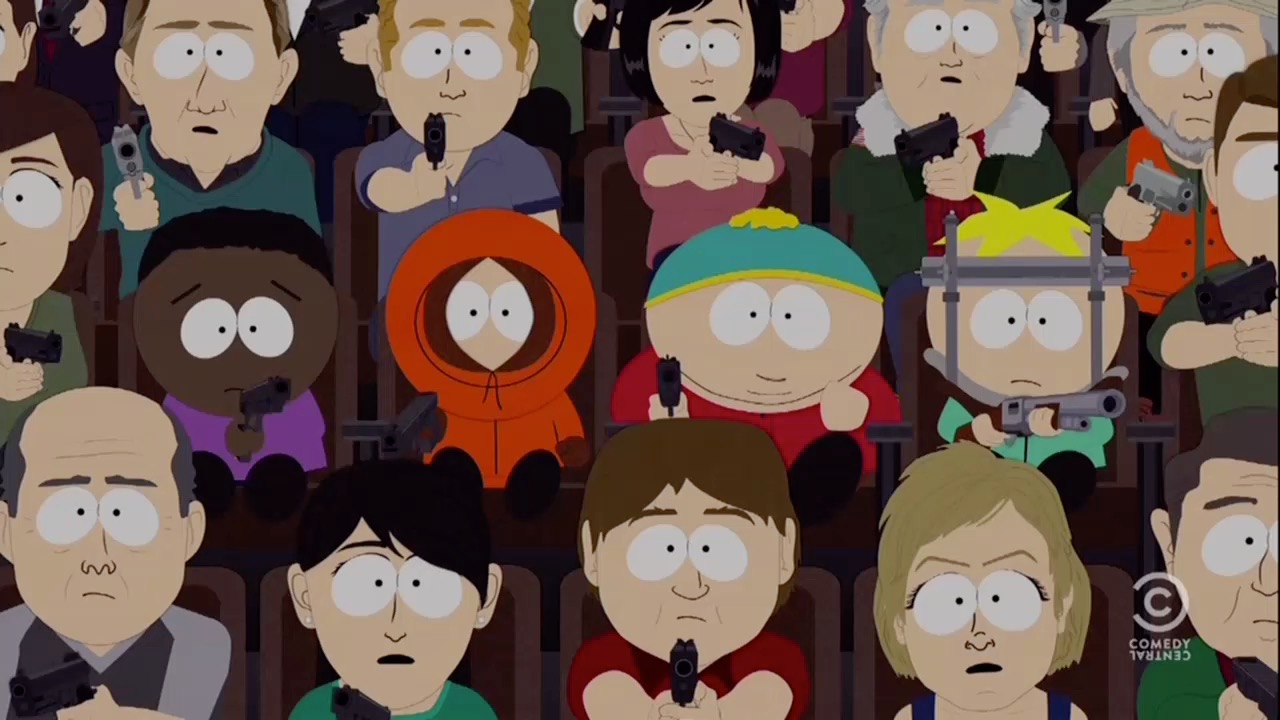 Liberals must be so disappointed with the much-hyped "gun control episode" of South Park. There was a big build up that the show’s season 19 finale, “PC Principal Final Justice,” would see every South Park citizen arm themselves and lead to an explosive conclusion, but that never happened, much to their chagrin.

And Natasha Noman on Mic said of a preview clip, “The show's writers have zeroed in on, and made a mockery of, just how out of control gun violence in the United States has become.”

With PC Principal and two students missing, fear grips the town, and the people see arming themselves as the only way to be safe. As Jimmy finds out, guns aren’t the answer…unless someone is trying to kill you.

-Jimmy: What happened to you, Nathan? I always thought you were a nice kid. Now you've got a gun?
-Nathan: Oh, everyone's getting one of these now, Jim. Nobody knows who to trust.

-Nathan: Don't you kind of wish you'd had one back when Leslie betrayed you and nearly beat you to death?

-Jimmy: Oh. I guess it would have been a decent answer then. T-t-t-touché.

Liberals wanted the show to have some scene to prove that “guns are never the answer” – a tragic accidental shooting, perhaps, a mass shooting, or the town turning into The Purge style chaos. But instead, time after time people having guns led to solutions. When the Marsh family pulls their guns on each other some heavy truths come out and they all become closer as a result:

-Randy: I'm warning you -- You're on the wrong side of this. We're just trying to get answers.

-Sharon: You pulled a gun on our son, Randy!

-Randy: He pulled one on me first, Sharon!

-Stan: Because you wouldn't talk to me, Dad!

-Randy: Stanley, let your mother and I deal with this.

-Sharon: I told you to leave him alone!

-Shelly: God, I hate this family! Why are you always taking Stan's side?!

-Shelly: You're always acting like Stan can't do anything wrong!

-Stan: She doesn't always take my side!

-Shelly: You shut up or I swear to God I'll use this.

-Randy: Shelly, put it down now.

-Shelly: You don't even try to know me, Dad!

-Randy: I want to, Shelly! I just sometimes feel like you hate me!

-Randy: I don't hate you! I love you! I need to be a better husband, a better father! We all need to be better to each other!

-Shelly: Okay, maybe I need to stop being so angry!

-Randy: I love you guys.

-Stan: We love you, too, Dad. We just want to know what's going on with you.

-Randy: All right, I'll tell you everything. Wow. These things are amazing.

Later, Kyle wants to go to the South Park Gun Show: “Somewhere that's completely safe from any violence…There'll be so many guns that nothing bad can happen.” (You can practically hear liberal viewers snickering at that line anticipating a comeuppance.) By the time everyone at the gun show pulls their guns out and points them at each other, you’re bracing for the bullets to start flying. But once again, guns help solve the problem and the situation is diffused:

-Randy: We all could be better people -- all of us! We all played a part.

-Stephen: Maybe from now on people in this town need to communicate more! Care about each other!

-Mr. Garrison: If we're going to defeat our enemies, that's what it's going to take -- all of us, together!

It’s telling that with even with so much foreshadowing and hundreds of people packing, the show had no shootings. There were brief hits on easy access to guns (the South Park boys are shown to immediately get them) and safety (the gun store owner says, "Remember, if the safety's on, you're good as gone”) but certainly no big moment for gun grabbers to seize upon.