Social Justice Warriors just had their moment in the sun on the Grey’s Anatomy episode "Something Against You." Dr. Maggie Pierce (Kelly McCreary) had a big speech at the end of the show on racial micro-aggressions that concluded with her telling Dr. Amelia Shepherd (Caterina Scorsone) to “check your white privilege.”

This scene is bizarre on so many levels. First of all, the incident in question, where Amelia believed Jo Wilson when she said Stephanie Edwards was lying about something, happened at least two episodes ago. Why are they suddenly bringing it up and making it a race thing now? It really is, as Amelia says, “an issue all of a sudden.”

And how does Amelia not know if she sided with Wilson because she’s white? How does she not know if she’s a racist? Racism is all about intent. You aren't, as social justice warriors preach, subconsciously racist because of some "privilege" they confer on you. The Merriam-Webster Dictionary full definition of racism is "a belief that race is the primary determinant of human traits and capacities and that racial differences produce an inherent superiority of a particular race." That definition absolves at LEAST 90% of the people who are accused of racism today in America.

It also seems strange for Maggie’s character to be the one delivering this "teachable moment" monologue to her close friend Amelia. The whole thing just feels shoe-horned in because creator Shonda Rhimes decided she wanted to lecture on race. Again.

- Amelia: Oh, good! I can talk to you about this. I am worried I offended Edwards. I need you to tell me. 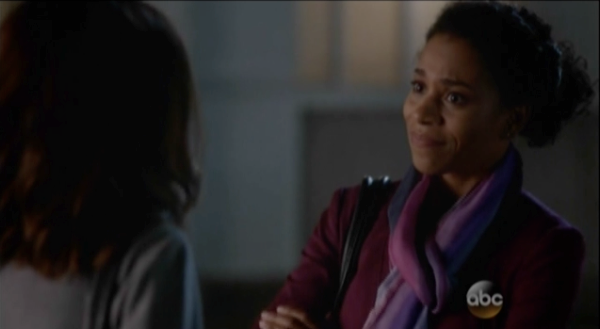 - Amelia: No. This is exactly what I was worried about.

- Maggie: Okay. What do you think you did?

- Amelia: I don't think I did anything, but I think she thinks I did.

- Maggie: Amelia, use your words. Did what?

- Amelia: [ Sighs ] Sided with Wilson over her because she's black. Which I didn't do. I think. I -- God, I-I hate that this is even an issue all of a sudden.

- Maggie: Well, it's not an issue for you. And it's not all of a sudden. I mean, okay, it's not "Mississippi Burning" or anything, but it is all over. It's when people assume I'm a nurse. Or when I go to get on an airplane with my first-class ticket, and they tell me that they're not boarding coach yet. It's like a low buzz in the background. And sometimes you don't even notice it, and sometimes it's loud and annoying. And sometimes it can get dangerous. And sometimes it is ridiculous, like right now.

- Maggie: Then notice it. Look, did Edwards tell you that she's okay?

- Maggie: Okay. Then don't give her the extra work of having to make you feel good about it.

- Amelia: Right. Okay, but how do I know that she's really –

- Maggie:  Because she knows you, okay? So listen to the words that are coming out of her mouth and believe them. This is not a small thing. And I'm glad that you feel like you can talk to me about it, but... I-I don't speak for all black people. I am not the spokeswoman. No one is. And it is kind of annoying to be asked questions like I am. But, um, one piece of advice that I can give you that I think we would all agree with is that if you feel uncomfortable having done it, check your white privilege, and don't do it again. But I don't think you're racist.