John 'Sid the Sloth' Leguizamo: If You Don't Support CRT You're 'Racist' or 'Ignorant'

John Leguizamo, another left-wing Hollywood star who thinks being famous makes them an expert, has joined CRT-enthusiasts in the fight to indoctrinate our children. In an Instagram rant posted by the actor on July 9 he claims that Critical Race Theory is simply higher education “thinky-talk” and if you claim that it’s being taught to your children you need to “calm down.”

The guy famous mostly for his voice role of Sid the Sloth in Ice Age started his video condescending to us yokels:

Are you bent the f**k out of shape over Critical Race Theory? Well the good news is you might not be a racist motherf**ker. You might just be ignorant of what the hell CRT is. Basically it’s a bunch of legal scholarship and academic thinky-talk that just tries to figure out what systems are in place that f**k over minorities in the US in subtle ways rather than the by full on in your face racism.

Charming. Bf the systemic racism against minorities in America is just so terrible, then why does Leguizamo have a net worth of over $20 million? Please, complain some more about how bad you have it in America while sitting in your mansion having food made for you by your personal chef. 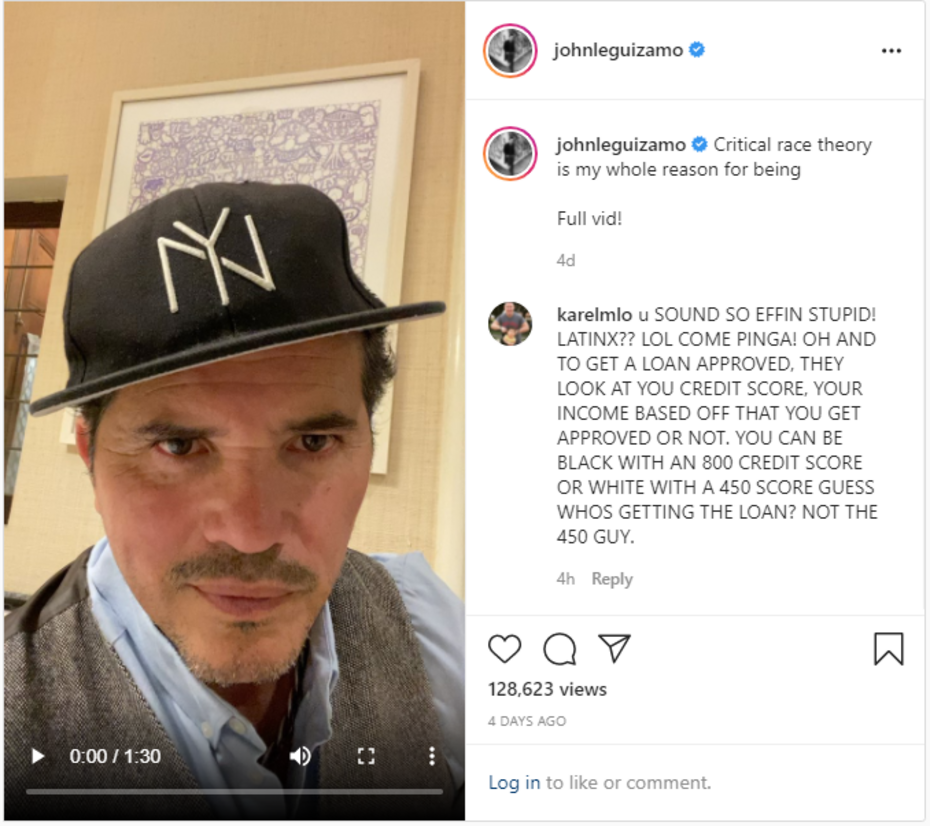 Legacy media has been denying the existence of CRT for months now, MSNBC host Tiffany Cross referred to it as the “latest culture war boogeyman” just this weekend. However, Leguizamo must have missed the message because he admitted that it exists in schools:

No one is teaching this stuff to your young kids so calm the f**k down! It’s pretty high-brow college level stuff and if your kids go to college they will definitely be exposed to this shit whether you agree with it no matter what you think okay. So again calm the f**k down.

He was almost correct, except these ideas actually are being taught to young kids. Christopher Rufo of the Manhattan Institute has debunked these lies countless times and has even called out the Washington Post for its overwhelming lies on the subject. He revealed “at least 25 public school districts in 12 states” that are teaching a book about the evils of “whiteness” called “Not My Idea.”

Leguizamo continued to inadvertently prove conservatives right with his next line, ending his Two Minutes Hate with:

Critical Race Theory is an evolving discipline and part of the mainstream thinking in the field is that because laws and attitudes are constantly changing, CRT also has to constantly change. So none of this is set in stone so relax, calm the f**k down.

Sid the socialist sloth repeats the demand to calm down while simultaneously yelling at his phone.

The tactics of the left are now to deny the existence of CRT while at the same time claiming that it is only taught in colleges. I guess when everyone has their own ‘truth’ both things can be true at once.