The New York Times' Damien Cave reported Friday from Havana that Obama's liberalized policy shift toward Cuba meant that that country was finished with its "venerable....leader" (not ruthless dictator) Fidel: "Focusing on Its Future, Nation Leaves Fidel Castro to History." Cave also took a shot at "stiff-backed critics of Fidel’s government." As Miami bureau chief, he fostered a bizarre obsession with hypothetical inequality that might transpire in a freer Cuba.

The college students of a surprised Cuba sang karaoke on Thursday afternoon beside a dark green tank memorializing the Cuban revolution. They played dominoes in the shade of the University of Havana law school, where Fidel Castro found his footing as a leader with a pistol at his side.

When asked about the historic shift by the United States to ease its trade embargo and pursue normalized relations with Cuba, they spoke first of what it meant for the Cuban people, then of what it said about President Obama, and finally, a few mentioned the boldness of President Raúl Castro.

They said nothing of Fidel.

At a moment described by many as an equivalent to the collapse of the Berlin Wall, the absence of Fidel Castro -- he has said nothing about it, and has not appeared in public for months -- spoke volumes. For many Cubans, it confirmed that Fidel, perhaps by his own design, is slipping further into the past, into history, at a time when his approach to the United States seems to be fading as well. 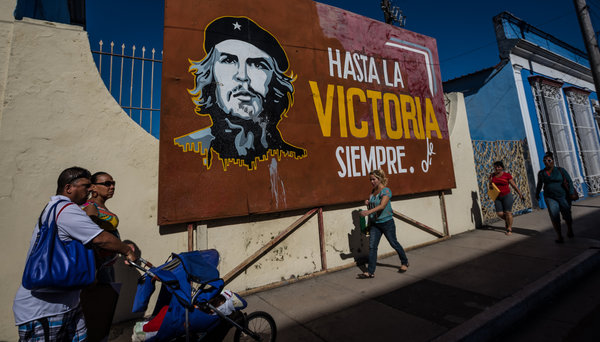 Fidel is still an imposing figure in the Cuban consciousness, a leader so venerable and fiercely protected that many avoid talking about him at all. Few here or in Washington, where the name Fidel is often shorthand for communist revolution itself, suggested that détente with the United States could have happened without his approval.

"Fiercely protected" is an awfully mild euphemism. Did it not occur to Cave that Cubans don't feel free to voice their opinion on Castro because Cuba is a communist dictatorship without freedom of speech?

Some of the former leader’s most loyal followers here have even described Mr. Obama’s recognition of Cuba with a Castro still in power as a final triumph for Fidel -- a formal nod of respect that the old guerrillero has demanded since 1959.

Cave naively seems to think that inequality comes only under capitalism, when in fact inequality is never higher than between the ruling elite and the common folk under authoritarian regimes.

And yet the new Cuba that Raúl is fashioning from the old is a far cry from Fidel’s youthful revolution. Today’s Cuba seems less concerned with ideals than dollars. It is a hatchery of private enterprise and nascent inequality, where property can be bought and sold, along with cars and filet mignon. It is a proud country, tired of struggling, where the poor can see the rich rising along the way to Raúl’s stated goals: economic growth and stability.

“Raúl is a pragmatist; he is not a mindless idealist,” said Brian Latell, a former Central Intelligence Agency analyst who has written books on the Castros. “Fidel has always been the heavy anchor on change and reform.”

Perhaps the difference is that now, with Cuba’s economy still on the edge of collapse, that weight seems to be lifting as Fidel fades further from view.

Even while admitting the country's economy is in free fall, Cave put a favorable spin on Castro's brand of communism.

It is not the principles that have changed, many students emphasized. Equality and sovereignty are among the most cited virtues by young, passionate Cubans following in Fidel’s academic footsteps. But to many of them, the relentless campaign against the ever-present enemy of the United States -- Fidel’s lifelong mission -- seems as dated as the tanks that dot the campus and countless public spaces all over Havana.

It was no coincidence that on Thursday, when asked who would benefit most from the new thaw, many Cubans answered “the Cuban people,” even before they were asked to choose between Raúl Castro and Mr. Obama.

That was true for loyal Fidelistas and for stiff-backed critics of Fidel’s government.

Elian Gonzalez, the Cuban boy who came to America on a life-raft only to be forcibly removed from his relatives' home in America and returned to the dictatorship, was Cave's subject on Saturday: "Crucible of Cuban Zeal Redefines Revolutionary."

Cave dropped a quote from a pastor from Gonzalez's town that conveniently lined up with Cave's own obsession with the hypothetical dangers of inequality that may occur when people are finally given the freedom to earn a decent livelihood of their choosing:

Greed and envy seem to be on the rise, she said: with the increasing gap between rich and poor in town, petty theft has become more common.

As the paper's Miami bureau chief, Cave pushed that city's Cuban-American community to rid themselves of its fixation on Fidel Castro's Communist tyranny and start voting Democrat like other minority groups. An August 2011 story from Havana fretted that allowing Cubans to own their own homes could result in, gasp, "disparities of wealth."

In a related story from Friday's paper, reporters Ashley Parker and Nick Madigan emphasized the anger of Florida's Republican Sen. Marco Rubio, who opposes Obama's normalization, in "A Republican Hawk Sticks to His Tough Line on Cuba."

When a visibly angry Senator Marco Rubio of Florida emerged as the face of hard-line Republican opposition to President Obama’s new outreach to Cuba, he swept political calculations aside.