Brian Williams’ admission that he lied about being shot down over Iraq has generated a considerable amount of fallout.

CNN host Brian Shelter, USA Today’s Rem Reider, NPR’s media correspondent, and The Baltimore Sun’s media critic -- none of whom are staunch conservatives by the way -- have all expressed serious doubts about Williams’ credibility and integrity as a journalist.

The Baltimore Sun’s David Zurawik told CNN that NBC has insulted "millions of military families in this country who suffer everyday diminished lives by the injuries and the wounds that people who fought honorably in those wars suffered."

"I think you would know if you were in a helicopter that was actually hit by a missile," liberal Rosie O’Donnell quipped.

According to the New York Post, Williams’ predecessor Tom Brokaw wants Williams fired—even though he allegedly knew that Williams’ Iraq story was false.

Variety reported that Williams ignored the advice of senior NBC executives to stop telling the false Iraq story in public.

Although the Washington Post reported on Williams’ lie, other newspapers buried the story. 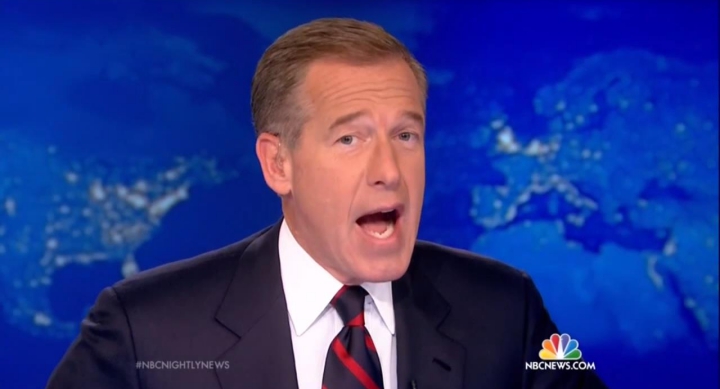 And while Williams has his share of detractors, he does have defenders, although some of them are not exactly the sort of company you'd want to keep when accused of fudging the truth. For example, Dan Rather, who famously told Fox News’ Bill O’Reilly in 2001 that “you can be an honest person and lie about any number of things,” stood by Williams.  Rather remarked that Williams is “an honest and decent man, an excellent reporter and anchor--and a brave one. I can attest that.”

Williams’ claim that he “misremembered” became harder to believe as audio emerged of him recounting the same false story nearly a year ago.  During an interview on Baldwin’s WYNC radio show Here’s the Thing in March 2013, Williams confessed to Baldwin that he was worried he would die on the helicopter hit by enemy fire.  Of course, he was not a passenger on any such helicopter.

Williams also repeated the lie to David Letterman in 2013.

A look at Williams’ reporting on another other major event reveals a bizarrely similar tale wrought with unanswered questions.  When discussing his rescue from Hurricane Katrina, Williams claimed that he became sick with dysentery, survived a hotel “overrun with gangs,” and had to be “rescued from the stairwell of a five star hotel in new Orleans by a young police officer.”  Although there is no direct evidence that Williams was lying, he did not explain how a hotel used as a staging area for policemen was “overrun with gangs,” nor did he provide any corroboration of his story.

New Orleans residents also have begun to question Williams’ account of his time in the city.  Williams claimed to have seen bodies floating in the French Quarter, which is on high ground and remained largely dry.  Regarding Williams’ alleged dysentery, a former city health director couldn’t recall a single case of gastroenteritis but did note that his dogs drank floodwater and “didn’t have any problems.”

Ironically, Williams is also a member of the Board of Directors of the Congressional Medal of Honor Foundation.

NBC was more than happy to scrutinize Hillary Clinton’s 2008 false claims about coming under sniper fire in Bosnia.  It seems that when their top anchor’s lies are similarly exposed and disputed, the network doesn’t have much interest in holding themselves to the same standard.