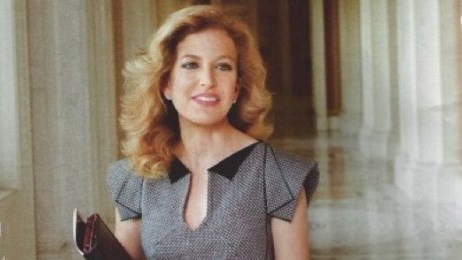 When the RNC paid for a wardrobe for VP nominee Sarah Palin, the media screamed. When Debbie Wasserman Schultz tries to get the DNC to pay for her wardrobe, the same media yawns. While the major networks and print media extensively covered the Palin wardrobe controversy in 2008 and beyond, the media has been nearly silent on the DWS effort to score some decent threads from the DNC or Obama campaign.

Flashback to 2008 when Alaska Governor Sarah Palin was tapped to be GOP presidential nominee Sen. John McCain's vice presidential running mate, just five months after giving birth to her fifth child.  The campaign helped Palin put her best foot forward with a convention and campaign-appropriate wardrobe under a tight deadline.  Politico first broke the news, and the rest of mainstream media had a field day, slamming Palin and Republicans.

NBC inquired, "Do the clothes clash with the message?" NBC led a newscast with the story, as other outlets were relentless in slamming Palin for the post-pregnancy wardrobe. As yet, NBC has not wondered out loud if Debbie Wasserman Schultz's request for clothing is clashing with the Democrat message, and has not led a newscast about the controversy.

Politico reports that embattled Democratic National Committee Chair Debbie Wasserman Schultz of Florida has repeatedly insisted, lobbied and had others lobby on her behalf to have the DNC and/or Obama campaign pay for her wardrobe for the 2012 Democratic National Convention, the 2013 Obama inauguration and the 2013 White House Correspondents Dinner.  While DWS denies this, the Politico report is thorough.

In 2012, Wasserman Schultz attempted to get the DNC to pay for her clothing at the Democratic National Convention in Charlotte, multiple sources say, but was blocked by staff in the committee’s Capitol Hill headquarters and at President Barack Obama’s reelection campaign headquarters in Chicago.

She asked again around Obama’s inauguration in 2013, pushing so hard that Obama senior adviser — and one-time Wasserman Schultz booster — Valerie Jarrett had to call her directly to get her to stop. (Jarrett said she does not recall that conversation.) One more time, according to independent sources with direct knowledge of the conversations, she tried again, asking for the DNC to buy clothing for the 2013 White House Correspondents’ Dinner.

Wasserman Schultz denies that she ever tried to get the DNC to pick up her clothing tab. “I think that would be a totally inappropriate use of DNC funds,” she said in a statement. “I never asked someone to do that for me, I would hope that no one would seek that on my behalf, and I’m not aware that anyone did.”

Tracie Pough, Wasserman Schultz’s chief of staff at the DNC and her congressional office, was also involved in making inquiries about buying the clothing, according to sources. Pough denies making, directing or being aware of any inquiries.

But sources with knowledge of the discussions say Wasserman Schultz’s efforts couldn’t have been clearer. “She felt firmly that it should happen,” said a then-DNC staffer of the clothing request. “Even after it was explained that it couldn’t, she remained indignant.”

This story is based on interviews with three dozen current and former DNC staffers, committee officers, elected officials, state party leaders and top Democratic operatives in Washington and across the country.

While DWS has obviously failed in her quest for a new wardrobe from the DNC and the RNC did, in fact, pay for a Palin wardrobe, the media daggers were not for the RNC in 2008, but were mostly directed at Sarah Palin. Yet nearly two days after the revelation that the DNC chair made several wardrobe requests, the mainstream media has not found a space to report the Wasserman-Schutz wardrobe malfunction.

[HT The Blaze for the 2012 Vogue image of DWS. They noted the dress she wore in Vogue retailed at Bergdorf Goodman for $2000.]