The Flint crisis gained national attention as many activists got involved, including the Black Lives Matter movement. Patrisse Cullors of BLM told Buzzfeed News that in situations like this “poor black communities end up getting the shorter end of the stick.”

After officials discovered lead contamination in Flint, Michigan, media outlets scapegoated Gov. Rick Snyder, a Republican. Comedy Central host Larry Wilmore even joked with a guest on April 26, 2016, about “which type of execution” Snyder should face for the contamination crisis.

What the networks didn’t report was that Democrats governed Flint and dozens of other cities which, according to The Guardian (UK), used “cheats” for lead testing techniques.

Broadcast networks covered the lead contamination crisis in 15 evening news stories between March 10, 2016, and June 10, 2016. In 93 percent (14 out of 15) of those stories, the networks did not mention the Democratic governance of cities with lead problems. While the broadcast networks hyped Snyder’s “public flogging” for the Flint crisis, they mentioned the Flint mayor’s liberal politics in just one story. And none of the networks reported that a majority of cities with lead problems were run by Democrats. 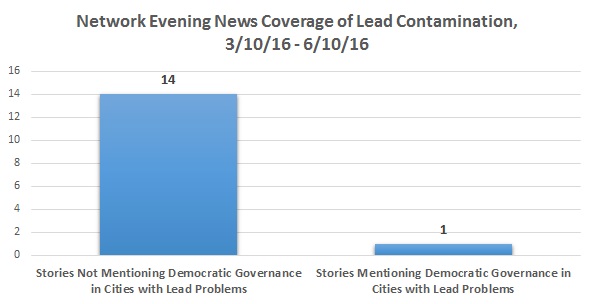 Instead, the evening news programs aired repeated calls for Snyder’s resignation, and hit the governor hard after he appeared on Capitol Hill to discuss the Flint water crisis.

During that hearing, both Snyder and Environmental Protection Agency (EPA) Administrator Gina McCarthy were criticized for their roles in Flint’s crisis. CBS, however, focused mostly on Snyder’s critics.

The evening news shows only hinted at Flint Mayor Karen Weaver’s Democratic affiliation once, by saying she was a Hillary Clinton supporter. Yet, networks routinely pointed out that Snyder was a Republican.

Flint was not the only city with lead in its water.

Early in 2016, The Washington Post and The New York Times both reported that several U.S. cities previously dealt with lead contamination.

The Times reported that Flint’s crisis “may be the most serious contamination threat facing the country’s water supplies. But it is hardly the only one.” It then listed several cities, plagued by lead problems, all of which had Democrat mayors.

British newspaper The Guardian found even more damning information. The paper investigated and found at least 33 cities spent a decade using questionable lead tests and in so doing, likely misled regulators over lead levels in water.

“Water departments in at least 33 cities used testing methods over the past decade that could underestimate lead found in drinking water,” Guardian reporters Oliver Milman and Jessica Glenza wrote June 2.

A majority of the cities spent a decade altering lead tests in ways that got Michigan officials in trouble with the law.

“Of these cities, 21 used the same water testing methods that prompted criminal charges against three government employees in Flint,” The Guardian reported.

Sampling instructions, to choosing which residents’ water to sample, can “profoundly impact how much lead is detected,” according to The Guardian.

For example, testers in those 21 cities were told to ‘pre-flush’ or run water for an extended period of time. A tactic, The Guardian said “helps clear lead from home plumbing prior to a test.”

At least 22 of the total 33 cities mentioned by The Guardian had Democratic mayors, including Philadelphia and Chicago which “asked employees to test water safety in their own homes.” Only two were found to have Republican mayors. But you wouldn’t have heard that by watching the evening news shows.

“What on earth can you do when the environmental policemen at EPA have condoned open cheating on the water lead rule for more than a decade now?” Edwards asked.

Viewers may have thought Flint’s crisis validated the tired liberal narrative of Republicans grossly neglecting the environment. In reality, the national story was just the opposite. Flint was only one of a handful of Democratic-run cities that failed to protect citizens against lead contamination.