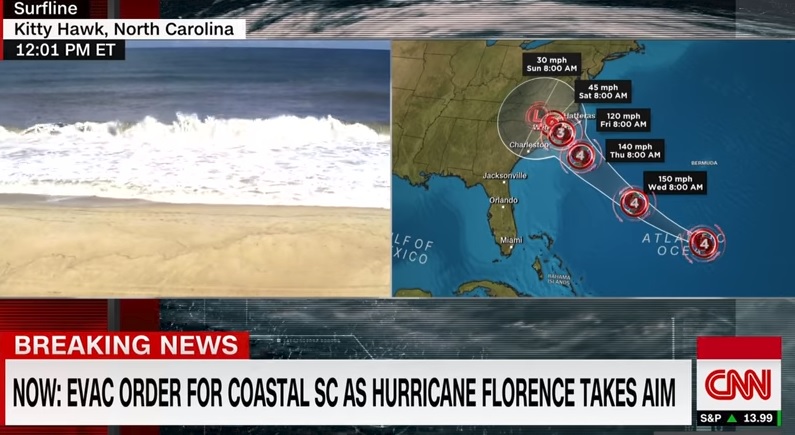 Hurricane Florence is heading towards the Carolinas as a Category 4 hurricane — but media hype is making a bad situation even worse. Journalists are already pushing climate change and fantasizing about creating a new category of hurricanes.

The Washington Post seized the opportunity on Sept. 11, to promote “new research” on a favorite climate alarmist talking point. The headline of reporter Chris Mooney’s story emphasized the possibility of a Category 6 [which doesn’t exist on the hurricane measurement scale]. He wrote that “some scientists” have been talking about it — before admitting an author of the study he was reporting on didn’t necessarily support adding a Category 6 to the scale.

Research using new computer modeling showed a warming climate would mean “faster” and “more” rapidly intensifying hurricanes, and even “in some extreme cases, grow so powerful that they might arguably be labeled ‘Category 6,’” Mooney wrote.

Connecting it to current events, Mooney noted that Hurricane Florence was a storm that rapidly intensified. The NOAA Geophysical Fluid Dynamics Laboratory generated the new model.

Mooney made it sound like the study supported the idea that this has already been happening writing, “We’ve already seen the signs,” and citing two hurricanes (Maria and Patricia) that quickly strengthened.

However, tucked into the middle of the article, Mooney admitted that the “forward-looking study by Bhatia and his colleagues remains agnostic about precisely what is happening right now.”

"This paper doesn’t really say what we’ve had so far, if there’s a trend,” Bhatia said. “It literally just says, 'Okay, in this particular model, climate change is going to make XYZ more likely.'"

At the very end of the story, Mooney buried skepticism from “another top hurricane researcher” Chris Landsea who was “less convinced” by Bhatia’s study. Landsea said it “deviates from most of the earlier published work which showed ... no significant change in major hurricane numbers, and only a 2-5% increase in intensity of hurricanes.”

When NOAA said “it is premature” to link hurricane intensity to climate change, a host of nonprofit organizations made sweeping assertions about those two hurricanes and tried to connect them to climate change and fossil fuel use. Bill McKibben’s far-left environmental group 350.org, even advocated creating a “Category 6” for “super storms that are emerging in our changed climate.”