Business and technology magazine Fast Company may have pulled a fast one over any readers unwilling to whip out a calculator when thinking about the Universal Basic Income (UBI).

A universal basic income is when a government provides a certain amount of money unconditionally, to all individuals regardless of employment status or income level.

Fast Company recently promoted a left-wing analysis of the UBI if it were implemented in the U.S. One of the scenarios it focused on would cost $2.8 trillion annually, in either additional federal debt or higher taxation. To put that in perspective, the federal government collected $3.3 trillion in tax revenue in 2016, according to the Congressional Budget Office.

The Fast Company story not only omitted the massive price tag and promoted a UBI without quoting any critics, staff writer Ben Schiller didn’t even report the liberal research correctly.

Schiller’s Sept. 13, article proclaimed,“A Universal Basic Income Would Do Wonders For the U.S. Economy.” Hammering the point home, his subhead claimed, “It’s not a giveaway; it’s a permanent economic stimulus.”

Not only did the story boost the “left-leaning” Roosevelt Institute’s analysis about improving the economy through universal basic income, it misreported the group’s modeling of the UBI. He claimed that “in all cases--including different ways of paying for an UBI--the impact would be positive, economically speaking.” That wasn’t true.

Schiller touted the Roosevelt Institute’s models (which used Keynesian assumptions) included the notion that a UBI of $1,000 a month for all adults would create almost “whopping 12.56 percent” economic growth over eight years. He didn’t say it, but that was the version that would cost about $2.8 trillion a year in deficit spending.

Fast Company didn’t make that clear at all. Schiller claimed that growth was possible even if you raise taxes to “pay” for it. However, the Roosevelt Institute acknowledged that in the model where they raised taxes to pay for a UBI the model “forecasts no effect on the economy.” (Emphasis added). 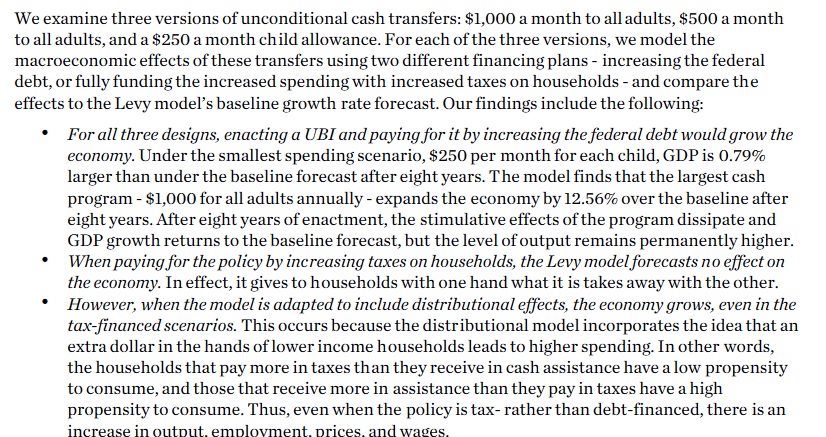 The Roosevelt Institute downplayed that problem with other models “adapted for distributional effects” which it claimed would still help the economy by redistributing money to lower-income households likely to spend the money. But even if their assumptions turned out to be correct, the amount of GDP growth in each of the models with increased taxes was far lower than what Schiller claimed.

Schiller also failed to include a single critic of UBI. The closest thing to criticism was an admission that the research “assumptions” are “controversial,” and contradicts “conservative thought.”

He wrote, “While economists agree that giving people money tends to increase consumer spending and therefore economic growth, the assumptions underlying the paper are sure to be controversial. For one, it assumes that people will continue to look for work despite having other income (in line with research from another Roosevelt-affiliated researcher, Ioana Marinescu). For another, it assumes that higher taxation to pay for UBI wouldn’t affect how households spend their money. That contradicts a key tenet of modern conservative thought, which says cutting taxes increases spending.”

The UBI is already controversial. Even left-wing Brookings Institution has called it a “step too far,” and former Vice President Joe Biden is slated to make a speech against it on Sept. 19, according to Axios.

Some conservatives have called it a “terrible idea” which would make work “optional” and disconnect consumption from production.