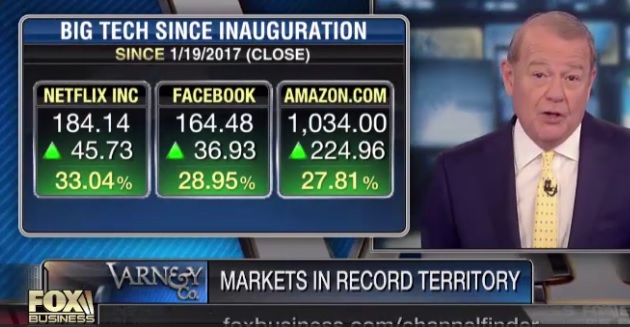 The Dow Jones Industrial Average set its 26th record high of the year on July 19, prompting Fox Business anchor Stuart Varney to check in on the “Trump rally” and how much it boosted American wealth.

The rally began after Donald Trump’s presidential victory brought optimism that he would pursue tax reform and other pro-growth economic policies.

“Donald J. Trump has been president for exactly six months. How is it going?” Varney asked on his show July 20. “His growth agenda turned on investors and when the swamp stalled that growth plan, profits went up big time and stocks went up some more. The ‘Trump Rally’ has added, wait for it — $4.1 trillion to the nation’s wealth so far!”

Varney also criticized the media for being “overwhelmingly negative” and “contemptuous” toward Trump, at the very same time.

“Investors might think very differently. The great success of the Trump presidency thus far is not what he’s done, but what he promises to do: namely — get the economy going again. Evidently, investors believe he might yet get it done,” Varney said. He reiterated many of those views in an opinion piece on the Fox News website.

“I think it is. Because, again, it’s all about expectations, Stuart,” Fitz-Gerald said. “It’s a show-me rally. We need to be shown a lot on health care, taxes and those sorts of things now. But traders know they’ve got to go for the future and that’s going to create wealth which why they, ta-da-, moved into the markets.”

Varney acknowledged the administration’s legislative efforts have been less successful than the stock market so far.