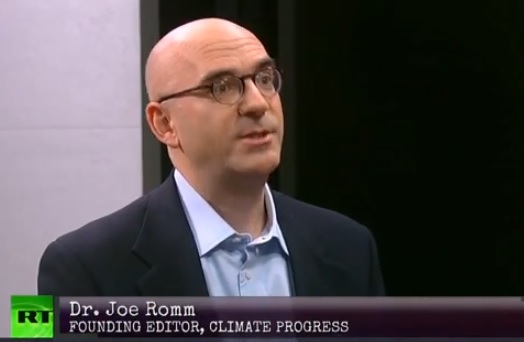 Climate Progress founding editor Joe Romm is furious with The New York Times for hiring a person he claims is an “extreme climate science denier.”

Romm was referring to Pulitzer Prize winner Bret Stephens of the Wall Street Journal. His rant on Think Progress against the Times included Holocaust denialism and brought up the KKK.

On April 12, both newspapers announced that Stephens joined the Times as a columnist in part of the newspaper’s efforts to “further widen” the range of views it presents.

In his prior job at the Journal, Stephens criticized global warming “panic” and the religious fervor of environmentalists, wrote about Climategate and funding for alarmist science, among other things. The left-wing Huffington Post admitted that the Times defended Stephens by saying he’s not a “climate denialist.” Stephens told HuffPost he is a “climate agnostic.”

“To pretend like the views of a thinker like Bret, and the millions of people who agree with him on a range of issues, should simply be ignored, that they’re outside the bounds of reasonable debate, is a really dangerous form of delusion,” the Times editorial page editor James Bennet told the liberal blog.

Romm’s reaction illustrated against just how unhinged climate alarmists become when voices of dissent are allowed: “Will that ‘logic,’ the Times could hire as a columnist former Imperial Wizard of the Ku Klux Klan David Duke — or a flat earther or someone who thinks vaccines post a health hazard. After all, millions agree with them.”

Climate Progress is part of Think Progress, an arm of the George Soros-funded Center for American Progress.