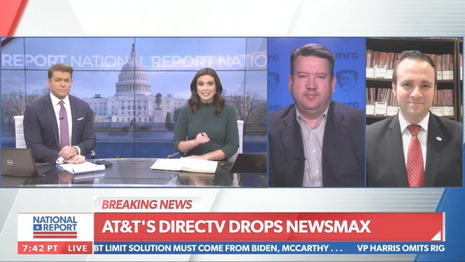 Newsmax reported Jan. 25 that DirecTV “cut” the outlet’s “signal, immediately shutting the network off from more than 13 million customers of the satellite service, DirecTV Stream, and U-Verse." Newsmax said it was “seeking a fee with a 75% discount to its market value, and compared to fees currently paid by DirecTV, almost all 50 channels below Newsmax in ratings get higher fees.”

Newsmax Media CEO Christopher Ruddy didn’t mince words about the implications of what DirecTV did: “‘This is a blatant act of political discrimination and censorship against Newsmax.’”

DirecTV also dropped OAN in April 2022. In a March, 2022, lawsuit alleging breach of contract, OAN said DirecTV caved to “political pressure and have put their unlawful interests and the unlawful personal, political, and financial interests of their management ahead of contractual and legal obligations.”

“Is this a new form of red-lining where Big Media is trying to keep conservatives out of the marketplace?” asked MRC Business Vice President Dan Schneider. “Newsmax is a highly-rated network that has proved its market value. Conservatives should be very concerned about what’s going on.”

On Wednesday morning, NewsBusters Executive Editor Tim Graham and Managing Editor Curtis Houck joined Newsmax's National Report to react to DirecTV's decision. Speaking to hosts Shaun Kraisman and Emma Rechenberg, Houck also said it was “very concerning” and noted that Newsmax is closer to CNN and MSNBC in the ratings than the two far-left networks are to the Fox News Channel.

For his part, Graham called out the fact that, while liberals object to Newsmax being allowed on TV packages, Americans haven't had a choice as to whether their tax dollars go to fund far-left news outlets in NPR and PBS.

A DirecTV spokesperson reportedly told The Daily Beast that the company “wanted to continue to offer the network, but ultimately Newsmax’s demands for rate increases would have led to significantly higher costs that we would have to pass on to our broad customer base.” Ruddy said in his statement that “‘[t]he most extreme liberal channels, even with tiny ratings, get fees from AT&T's DirecTV, but Newsmax and OAN need to be deplatformed.’”

Newsmax tied its present situation with that of OAN’s deplatforming by DirecTV to a letter by Democratic congressional members exhibiting pressure on the company to silence “conservative” news outlets:

AT&T DirecTV's decision to drop OAN and Newsmax comes on the heels of a February 2021 letter written by Rep. Anna Eshoo, D-Calif., and then-Rep. Jerry McNerney, D-Calif., demanding that cable and satellite TV providers explain their alleged role in the ‘spread of dangerous misinformation’ by carrying conservative networks. After the Eshoo and McNerney letter, in April 2022, AT&T removed OAN from DirecTV.

Freshman Rep. Wesley Hunt (R-TX) said in a statement to Washington Examiner that “‘[d]eplatforming Newsmax is the latest development in the Left’s ongoing campaign to purge voices they disagree with from the public sphere.’” He continued: “‘This decision by DirecTV and TPG Capital will cut off tens of millions of viewers who rely on Newsmax for their news and information.’”