Nation of Victims (2022) author Vivek Ramaswamy didn’t pull any punches about how a centralized digital currency would catapult America into a new, scarier era of dystopian government surveillance. 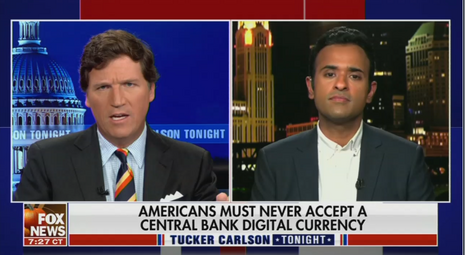 The Strive Asset Management executive chairman went on the Nov. 25 edition of Fox News’s Tucker Carlson Tonight to slap down the “Great Reset — this dissolution of boundaries between the public and private sector, between different nations.”

Central bank digital currencies (CBDCs), according to Ramaswamy, are a “really bad idea” that amount to a “symptom of that deeper cancer” of a “New World Order.” Host Tucker Carlson kicked off the segment by arguing that CBDCs effectively meant “Chinese social credit scores come to America.”

Ramaswamy ripped apart leftist economists' arguments promoting CBDCs: “[T]hey say that actually China is doing [CBDCs] and the U.S. will be less competitive and that the dollar will be less strong if the U.S. fails to keep up.” There are “so many things wrong with that argument,” he said. [T]hat’s a good path to get us to be more like China,” Ramaswamy warned. This “is not a good way for the U.S. to go in terms of being a surveillance state.”

Carlson stated at the beginning of the segment that federal authorities exploited the recent  liquidity scandal involving FTX founder and Democrat mega donor Sam Bankman-Fried to push CBDCs. “Never let a good crisis go to waste,” Ramaswamy later quipped. Bankman-Fried oversaw a liquidity crisis at his cryptocurrency exchange that led to “a mass exodus of customers from the platform.” The crisis led to allegations of “fraud” against Bankman-Fried that reportedly cost investors at least $11 billion in damages.

Carlson noted that “several banks have announced already that they’re working with the [Federal Reserve] to” implement a centralized digital currency. “If that happens, we’re done,” said Carlson. “No more political debate. We will have unprecedented levels of regulation; of surveillance and of control.”