“I’m pretty convinced [COVID-19] came out of U.S. lab biotechnology, not out of nature — Just to mention after two years of intensive work on this. So it’s a blunder in my view of [U.S.] biotech, not an accident of a natural spillover,” Sachs said.

Sachs’ comments squarely align with Chinese propaganda on COVID-19’s origins. The argument that COVID-19 originated in the U.S. is not just “provocative”; it’s the same argument that China has hammered for months. China Foreign Ministry Spokesperson Hua Chunying even posted Sachs’s GATE center comments on Twitter. Hua tweeted in a thread: “Given the heavy human and economic toll taken by the virus, don't we owe it to the millions of lives lost to have a thorough investigation into US labs?”

Given the heavy human and economic toll taken by the virus, don't we owe it to the millions of lives lost to have a thorough investigation into US labs? #InvestigationintoUSLabs #COVID19

Soros is not only a friend of Sachs; the billionaire was actually one of his “biggest supporters.” Sachs’s “Millennium Village Project” received $50 million from Soros’s Open Society Foundations in 2006, and another $27 million promised over the next few years. Stanford University cited “harsh critics” who said Sachs’s “MVP was a waste of hundreds of millions of dollars” and “was riddled with fundamental methodological errors, and there is little scientific evidence that the project attained its goals.” 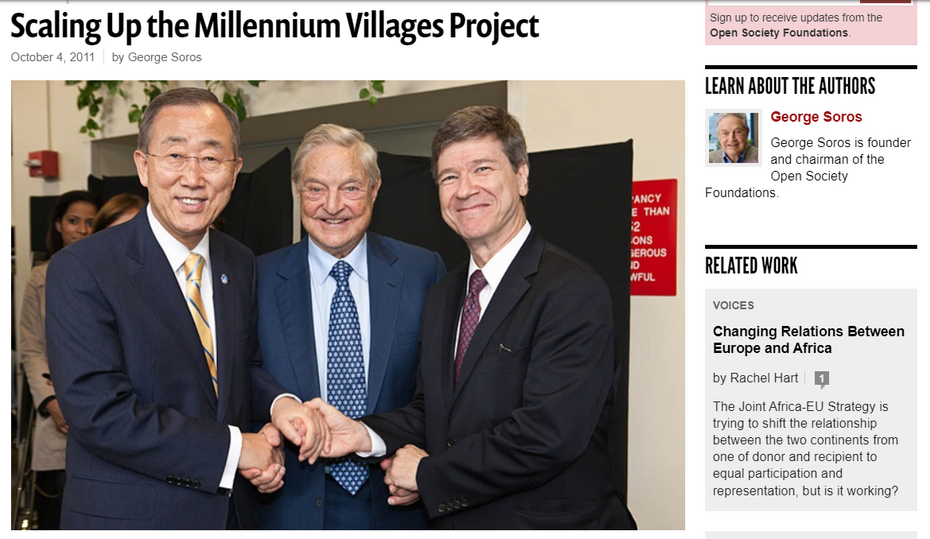 Giving China ammunition to feed its propaganda appears to be typical behavior for Sachs. National Review even dubbed him “China’s Apologist in Chief” in 2021. Sachs also reportedly holds an “advisory role at Beijing'[s] Tsinghua University,” according to Newsweek.

But when pressed by Newsweek for comment, Sachs apparently contradicted himself: “‘My personal best guess is that SARS-CoV-2 was thereby created and that it accidentally escaped from a laboratory, perhaps the Wuhan Institute of Virology, or perhaps elsewhere.” [Emphasis added.]

But China is not the only U.S. adversary to capitalize on Sachs’s comments. Sachs posted an interview he had with Iranian newspaper Tehran Times on his website. The interview was headlined, “Covid possibly came out of a U.S. biotechnology lab, says Columbia professor.”

The interviewer, Tehran Times’s Mohammad Mazhari, asked Sachs: “How do you see the media-political war over the origin of the pandemic? American officials and media blamed China for its outbreak.” Sachs immediately ran cover for the Chinese regime: “Yes, the U.S. has tried to blame China without admitting its own possible role. Governments should cooperate with the WHO to find the truth.” Council on Foreign Relations Hasib J. Sabbagh senior Fellow for Middle East Studies Ray Takeyh wrote in 2009 that the Tehran Times had “close ties” to the Iranian government.