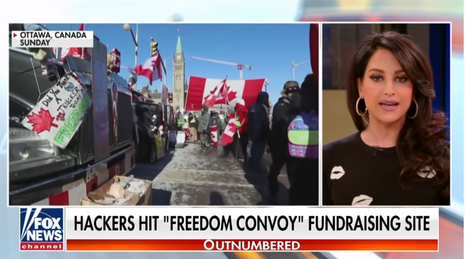 The Post revealed the identities of several individuals caught in the reported 100,316 donations leaked in the alleged GiveSendGo hack by contacting them personally and then reporting their names. The report was headlined, “Which U.S. communities sent money to support the Canadian trucker protests?” The story targeted individuals throughout the United States who “sent millions of dollars to support trucker convoys that occupied the Canadian capital and shut down commerce at key border crossings between the two nations.” The Post used the data leak to bully a number of the donors via email or phone call, and even had the gall to dox a lawyer who formerly worked in former President Donald Trump’s Commerce Department:

[A] $350 donation appeared associated with the name and email address for [one donor], a former top lawyer in the Commerce Department under President Donald Trump. He did not respond to an email, and there was no answer at a phone number listed for him.

Here’s another example of The Post’s bullying: “‘I am not surprised at the slightest in regard to this information being leaked,’ [one donor], a Beverly Hills real estate agent, wrote in an email to The Post when asked about leaked data showing a $100 donation associated with her name and an email address related to her company.” Even small donations were enough to irk the elitists at The Post enough to expose the donor's name to the world. [Emphasis added.]

Email provided to me by a source pic.twitter.com/qbzebYyHiP

The Post also bullied another person reportedly from “eastern Oregon” who also “donated to the Freedom Convoy, sending $2,000 through GiveSendGo on Feb. 5. In a place to add a note with the contribution, the 62-year-old [person] wrote that she sees the danger to liberty closer to home: ‘May God bless our truckers for saving our freedom!’” But The Post wasn’t finished: “ [Another donor] confirmed she donated $5,000 on Feb. 6 to the Freedom Convoy fundraising campaign using a [particular] zip code for the payment. ‘I’m anti-mandate libertarian,’ [the donor] told The Post in a brief email.”

The Post’s behavior mocked the Society of Professional Journalists (SPJ) Code of Ethics. The code directs journalists to “[r]ealize that private people have a greater right to control information about themselves than public figures and others who seek power, influence or attention. Weigh the consequences of publishing or broadcasting personal information.” In addition, the SPJ notes that journalists should “[r]ecognize that legal access to information differs from an ethical justification to publish or broadcast.”

EDITOR'S NOTE: The names of victims of the GiveSendGo hack were excluded from this report for their own safety.