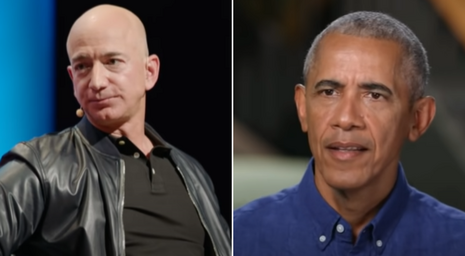 The Obama Foundation released a statement saying that leftist Post owner and mega-billionaire Jeff Bezos was donating a whopping $100 million “in honor of Congressman John Lewis” (D-GA), who recently passed away. The Foundation called the donation "the largest individual contribution received to date." The purpose of the grant includes “help[ing] expand the scope of programming that reaches emerging leaders in the United States and around the world.”

But this could present an issue for the newspaper Bezos owns, which has a sordid record of cheerleading for Obama. The most glaring example of the outlet’s bias was in December of 2008, when The Post was giddy for how “[t]he sun glinted off [Obama’s] chiseled pectorals sculpted during four weightlifting sessions each week, and a body toned by regular treadmill runs and basketball games.”

It will be interesting to see how The Post attempts to run its Obama love affair schtick with a straight face now. After all, The Post claims in the “Conflict of interest” section of its “Policies and Standards” page: “This news organization is pledged to avoid conflicts of interest or the appearance of conflict of interest wherever and whenever possible.” But here’s the best part: “We must be wary of entanglement with those whose positions render them likely to be subjects of journalistic interest and examination.” Oops.

In May 2014, nearly a year after it was announced that Bezos would be buying the newspaper, The Post had the audacity to run clear propaganda masquerading as news headlined: “President Obama and cheeseburgers: A love story.” The puff piece underscored what The Post apparently considered to be hard-hitting journalism when it comes to Obama:

Obama and Vice President Biden used the appearance to tout something they traveled the country discussing all week: the need to increase investment in America's often crumbling infrastructure, a move that would create jobs, alleviate commute times and boost the economy. But the trip underscored something else: Obama really loves cheeseburgers, [emphasis added.]

In November 2019, The Post ran a ridiculous story gaslighting readers about Obama’s alleged conservative credentials with the headline: “Barack Obama, conservative.” Oh, but there’s more! In August 2021, The Post used Obama’s birthday to characterize him as the “keeper of the flame of hope.” The headline was just as absurd: “Obama at 60: Feet on the dance floor, eyes on the future.” [Emphasis added.]

It doesn’t end there. In July 2019, The Post Deputy Editorial Page Editor Karen Tumulty pleaded with Obama in an op-ed labeled an “open letter” to the former president: “Mr. President, it is time. You must speak. Your country needs you.”

Conservatives are under attack. Contact The Washington Post at 202-334-6000 and demand it disclose Bezos’s funding every time it runs a news piece on Obama from now on.