The front of Sunday's Outlook section in The Washington Post is a complete spit take. There in bold type is the blatantly false headline "Barack Obama, conservative."

David Swerdlick is an employee of the Post's Outlook section, so this isn't some freakish freelancer. At first glance, this article seems like an obvious ploy to explain away just how radical the current crop of Democratic presidential candidates are by comparison. Here's the thesis: 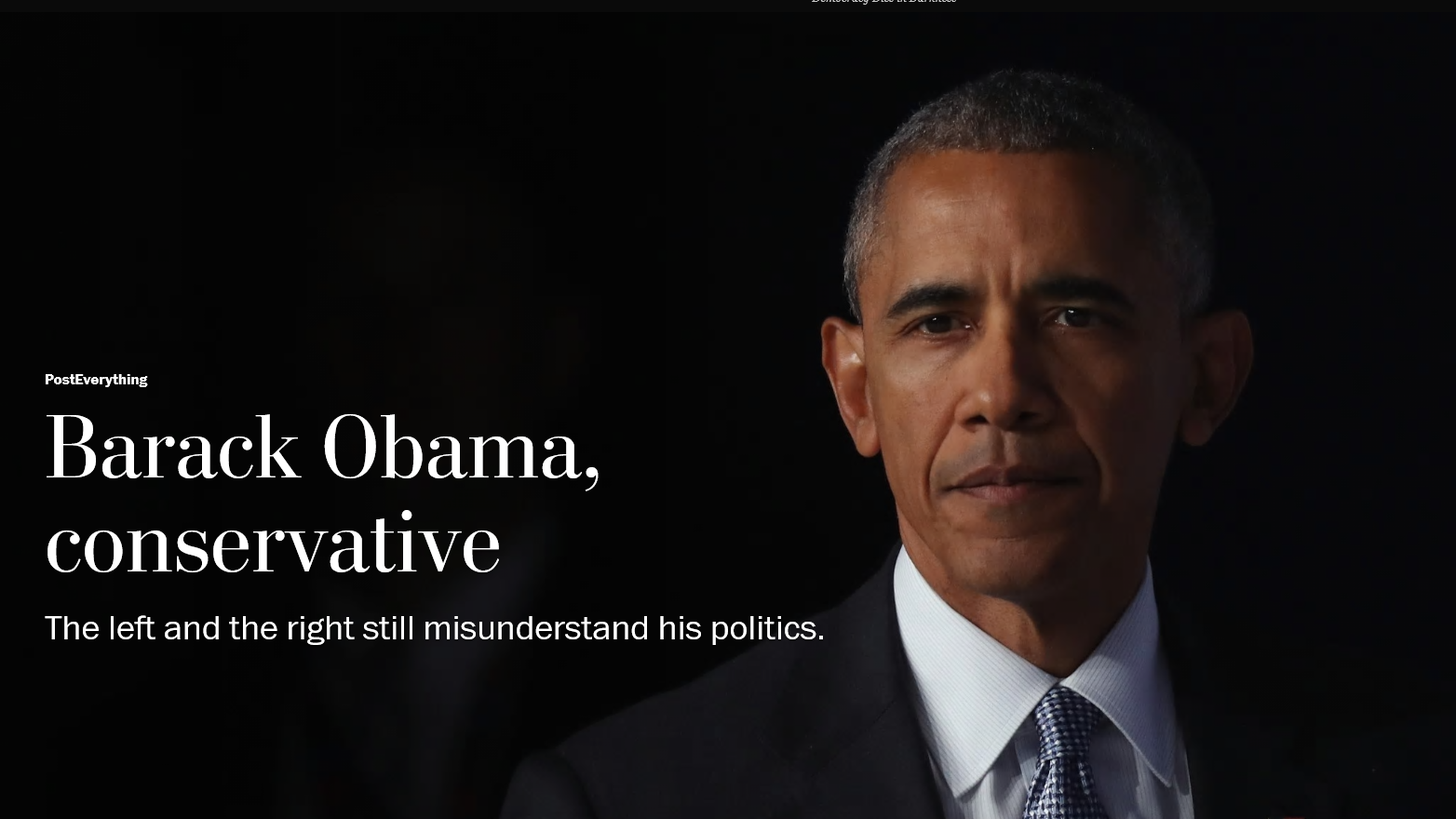 “This is still a country that is less revolutionary than it is interested in improvement.”

That remark helps explain why so many of the candidates’ proposals seem so far to the left of Obama. The former president was skeptical of sweeping change, bullish on markets, sanguine about the use of military force, high on individual responsibility and faithful to a set of old-school personal values. Compare that with proposals from his would-be successors: Medicare-for-all, the Green New Deal, free college, a wealth tax, universal basic income.

Given the political climate, it’s no surprise to see the party’s base clamoring for something dramatic. But the contrast between Obama’s steady approach and the seeming radicalism of his Democratic heirs can’t just be chalked up to changing times. It’s because the former president, going back at least to his 2004 Senate race, hasn’t really occupied the left side of the ideological spectrum. He wasn’t a Republican, obviously: He never professed a desire to starve the federal government, and he opposed the Iraq War, which the GOP overwhelmingly supported. But to the dismay of many on the left, and to the continuing disbelief of many on the right, Obama never dramatically departed from the approach of presidents who came before him.

There’s a simple reason: Barack Obama is a conservative.

What follows is a listing of incredibly lame excuses for how Obama is "conservative," like having a Norman Rockwell tableau of a family, or having Newt Gingrich praise his second Inaugural Address.

Conservatives would especially choke on "Obama was a believer in big government, but his views showed many similarities to those of Republican presidents," and then touted Teddy Roosevelt, Dwight Eisenhower, and George H.W. Bush.

There are blatantly false factual claims, such as "He later agreed to the Budget Control Act of 2011, known as “sequestration,” which brought down year-to-year deficits by slashing federal spending in exchange for GOP votes to raise the debt ceiling." Federal spending wasn't "slashed" in Obama's second term. It continued to rise.

Swerdlick can both suggest the center-left adores Obama, and yet he's a "conservative." This is another head-slapping paragraph:

The difficulty Democratic candidates have in grappling with Obama reflects the dissonance he’s generated for a decade: The center-left adores him, but to the far left, he’s a sellout. He’s being rethought on the center-right, but he remains the bete noire of the far right, which morphed from the (putatively) government-hating tea party wing to a strongman-loving core.