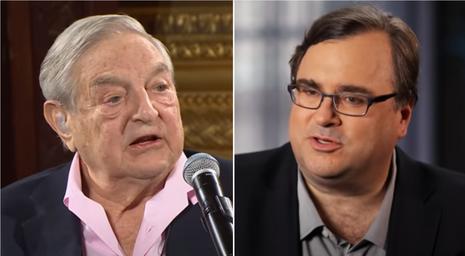 The leftist activist behind the liberal news operation Courier Newsroom is at it again with a new scheme that is being backed by some of America’s most notorious liberal billionaires.

But McGowan reportedly had the audacity to pontificate to Axios, “‘The information crisis we're in is so much bigger than politics.’” What a joke.

Soros’s Democracy PAC fueled ACRONYM’s super PAC PACRONYM with $2,750,000 in the 2020 election. Both ACRONYM and its affiliated PAC were part of a coordinated effort in 2019 to invest $75 million in anti-Trump ad campaigning in order to shape “how the public views Mr. Trump and the Democratic Party during the primary season, well before a nominee emerge[d].” Hoffman — who also previously backed ACRONYM — infamously supported a group that “spread disinformation during the 2017 Alabama special election for U.S. Senate,” according to The Washington Post. ACRONYM was also the group involved with the 2020 Iowa Democratic Caucus app fiasco. It also “ran one of the largest digital campaigns to defeat President Trump in the 2020 election, totaling $100 million,” according to Axios.

McGowan’s Good Information Inc. was previously reported as part of a “$65 million effort to push progressive local news around the United States as part of an attempt to match the dominance of right-wing media,” according to Vox Recode, as opposed to just vague, so-called “disinformation.” [Emphasis added.]

With McGowan, Soros and Hoffman’s history in mind, consider the irony of how Axios framed the new “disinformation” project: “Good Information Inc. aims to fund and scale businesses that cut through echo chambers with fact-based information. As part of its mission, it plans to invest in local news companies.” [Emphasis added.]

Good Information Inc. will reportedly be acquiring the scandal-ridden Courier Newsroom, according to Axios. But never fear: McGowan reportedly is looking to reach across the political aisle this time, Axios said. “[McGowan] points to The Bulwark, a center-right news site founded in opposition to Trumpism, as an example of the type of center-right news outlet it could fund.” Of course, Axios didn’t mention that the anti-Trump Bulwark was funded by another notorious liberal billionaire: eBay founder Pierre Omidyar.