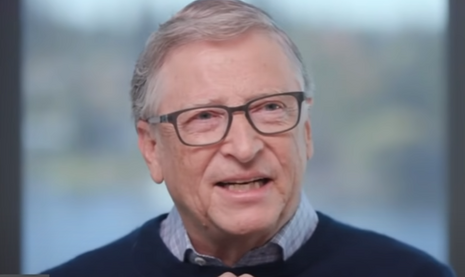 Liberal billionaire Bill Gates has reportedly secured over $1 billion in funding for his Breakthrough Energy Catalyst (BEC) project. The project is dedicated to accelerating “the commercial viability of four key solutions to the climate crisis: green hydrogen, sustainable aviation fuel, long-duration battery storage and carbon capture from the air,” according to Bloomberg News.

One of the top financiers for the project is none other than investment giant BlackRock, “the world’s largest investor in fossil fuels,” as characterized by The Australian Financial Review. BlackRock is giving the Gates project $100 million from its charitable arm, according to Bloomberg News. But here’s the kicker: After the BEC supplies the cash needed to get its eco-projects off the ground, Bloomberg News said, “debt financing and government funds can be raised to cover the remaining 90% of the cost.” This means taxpayer dollars will inevitably be sucked in to pay for the green pipe dreams of Gates. [Emphasis added.]

Bloomberg News reported that Gates estimated the cost for a global energy transition to net-zero emissions was an ungodly $50 trillion. But Gates even admitted in late 2019 that fossil fuel divestment has had “zero” impact on climate. Former Secretary of State John Kerry also acknowledged in 2015 that getting to net-zero emissions is meaningless. None of this has stopped Gates from hypocritically pushing unrealistic net-zero emissions standards on the world.

Gates has a notorious record for lecturing the rest of the world about climate change while being a big fossil fuel emitter himself. In fact, Gates admitted to CNN anchor Anderson Cooper in February that he had “one of the highest greenhouse gas footprints of anyone on the planet.” But in August 2020, he exploited the COVID-19 pandemic to encourage people to have conniptions over climate change in a blog headlined, “COVID-19 is awful. Climate change could be worse.” Gates didn’t apparently see the hypocrisy in getting a massive chunk of the funds for his climate pet project from the biggest fossil fuel investor in the world.

Surprisingly, BlackRock Chairman and CEO Larry Fink still tried to pass his company off as a champion on climate change. He said in a statement that achieving a net-zero world was “‘the shared responsibility of every citizen, corporation, and government.’” What a joke.

Conservatives are under attack. Contact Bloomberg News at letters@bloomberg.net and demand it report on the hypocrisy of Gates using fossil fuel giant BlackRock to fund his climate activism.