WATCH: Climate Fanatic Bill Gates Admits He Has One of ‘Highest Greenhouse Gas’ Footprints on Planet 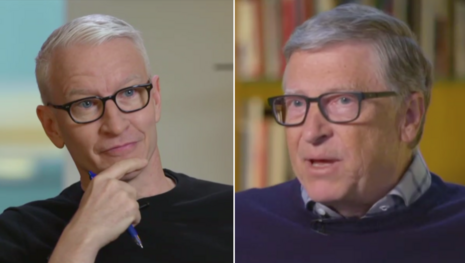 CNN anchor Anderson Cooper surprisingly decided to corner Gates on the extreme amount of “greenhouse gas” emissions that the tech billionaire emits through his private jet usage during a Feb. 14 60 Minutes interview on CBS. The astonishing part came as Gates admitted to Cooper that he had one of the “highest greenhouse gas footprints of anyone on the planet.” Cooper, however, spent most of the interview pushing Gates’s agenda to convince viewers of the need to completely transform the global economy into a green utopia.

Cooper cross-examined Gates, “Are you the right messenger on this? Because you fly private planes a lot, and you’re creating a lot of greenhouse gases yourself.” Then came the shocking admission from Gates: “Yeah, I probably have one of the highest greenhouse gas footprints of anyone on the planet.” Cooper then interjected that this was “kind of ironic.”

Gates — unfazed by the apparent dent in his credibility — later made an asinine claim that the green transformation of every aspect of daily human life would be the “most amazing thing mankind has ever done ... an all-out effort — you know — like a world war, but it’s us against greenhouse gases.” But Gates has clearly been playing both sides of the fight in his imaginary “world war.”

Cooper ignored one glaring hypocrisy in his questioning of Gates. Just last month, Gates was reported to have “joined a £3bn bidding war to buy the world’s largest private jet services company just as he prepares to publish his new book How to Avoid a Climate Disaster,” according to The Guardian. Cooper never brought the private jet services company bid up in his interview. [Emphasis added.]

Cooper had asked Gates earlier if he believed “[climate change] is the toughest challenge humanity has ever faced.” Gates responded by saying climate change was worse than —  wait for it — COVID-19: “Absolutely. The amount of change, new ideas, it's way greater than the pandemic. And it needs a level of cooperation that would be unprecedented.” [Emphasis added.]

The irony is that it was Gates who conceded in 2019 to the Financial Times (FT) that divesting from fossil fuels had “zero” impact on climate:

'Divestment [from fossil fuels], to date, probably has reduced about zero tonnes of emissions … I don’t know the mechanism of action where divestment [keeps] emissions [from] going up every year. I’m just too damn numeric.'

What would Cooper and Gates have to say about Forbes Magazine’s recent piece headlined, “This Blizzard Exposes The Perils Of Attempting To ‘Electrify Everything”? Forbes stated:

The massive blast of Siberia-like cold that is wreaking havoc across North America is proving that if we humans want to keep surviving frigid winters, we are going to have to keep burning natural gas — and lots of it — for decades to come.