The liberal media has to find a new way to keep its COVID-19 scare strategy going: Have “health journals” sound the alarm on the “climate crisis.” 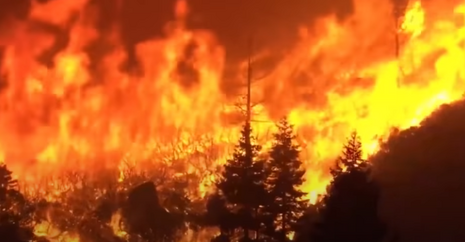 The Guardian is leading the charge. It screeched in its story’s headline: “More than 200 health journals call for urgent action on climate crisis.” The journals are reportedly “publishing an editorial calling on leaders to take emergency action on climate change and to protect health.”

The editorial demanded action to keep global temperature increases below “1.5C” and “halt the destruction of nature.” Too bad for The Guardian that Hoover Institution Visiting Fellow Bjorn Lomborg already slapped down this talking point in a February interview with Fox Business host Larry Kudlow: “[T]he U.N. Climate Panel tells us that in the 2070s — so, more than 50 years from now — the net impact of global warming will be equivalent to each one of us losing [only] somewhere between 0.2 and 2 percent of our income.”

The editorial, which is being published before the United Nations General Assembly, dismissed Lomborg’s context and belched end-of-times nonsense:

The science is unequivocal; a global increase of 1.5C above the pre-industrial average and the continued loss of biodiversity risk catastrophic harm to health that will be impossible to reverse.

The editorial The Guardian cited whined that failure to keep temperature increases below 1.5C would be “‘[t]he greatest threat to global public health.’” Lomborg previously pointed out in his book False Alarm (2020) that UN climate scientists said such goals “'would require rapid, far-reaching and unprecedented changes in all aspects of society.'” Lomborg categorized the policies needed for such change as “almost impossible” to implement. That appeared lost on The Guardian.

British Medical Journal (BMJ) Editor-in-Chief Fiona Godlee pivoted off of the coronavirus to claim that climate change was even worse:

Health professionals have been on the frontline of the Covid-19 crisis and they are united in warning that going above 1.5C and allowing the continued destruction of nature will bring the next, far deadlier crisis.

Lomborg slammed the media and activist sensationalism over climate change in his book:

There are strong incentives to tell the scariest possible story about climate change. Media gets more clicks and views with frightening stories. Campaigners get attention and funding. Researchers who position themselves as addressing apocalyptic threats get outsized attention, more recognition for their universities, and more future funding opportunities. Politicians who emphasize the scary scenarios get to promise to save us, and in the process gain the authority to distribute significant resources to fix the problem.

The Armageddon editorial will reportedly appear “in the BMJ, the Lancet, the New England Journal of Medicine, the East African Medical Journal, the Chinese Science Bulletin, the National Medical Journal of India, the Medical Journal of Australia, and 50 BMJ specialist journals including BMJ Global Health and Thorax,” according to The Guardian.

Conservatives are under attack. Contact The Guardian at national@theguardian.com and demand it stop peddling eco-extremism.