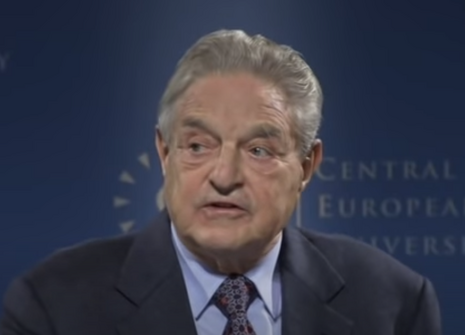 Fox News reporter Joe Schoffstall (who previously worked at the Media Research Center) reported that Soros is “fueling an initiative to ‘dismantle’ and replace the Minneapolis Police Department, campaign finance records show.” One group within the Soros philanthropic network, the Open Society Policy Center (OSPC), reportedly gave $500,000 to “Vote Yes 4 Minneapolis in November” only “one month after it was established, the records show,” Schoffstall said.

Vote Yes 4 Minneapolis, as Schoffstall described it, is a collective of “at least” 33 activist organizations “pushing a ballot initiative to amend the city charter to replace the police department with a public safety agency.” [Emphasis added.]

Vote Yes 4 Minneapolis has raked in over $1 million dollars since the Soros contribution, according to campaign finance disclosures that were released on July 10. Schoffstall identified the Soros cash as “being the most significant contribution.”

An Open Society Policy Center spokesperson attempted to paint its founder’s anti-police effort as a championing of local communities and so-called “‘racial justice’”:

‘Open Society is a longtime funder of efforts to secure racial justice and equity. We're proud to support local organizations who are engaging their elected leaders, city officials, and neighbors on how best to achieve community safety and well-being.’

The Vote 4 Yes Minneapolis coalition included bonkers left-wing organizations like the Soros-backed anti-police group Color of Change. OSPC gave Color of Change at least $1,400,000 between 2018 and 2019 alone. Another Soros group also just gave another $1 million to Color of Change’s super PAC this year. The super PAC is currently behind a disgusting petition called “Cut Ties With The [Fraternal Order of Police (FOP)]” which it dubbed “the deadliest frat in the world.”

Another group in the coalition is the far-left Socialist Alternative (SA). SA is behind everything from demanding public funding for a ”single-payer health care system” with free services such as “accessible abortions,” to pushing for “public ownership and democratic control of the major banks.”

Soros getting behind the movement to defund the police coincides with his massive exploitation of the murder of George Floyd. The goal has been to ram push racial politics down the American people’s proverbial throats. In 2020, the Open Society Foundations announced it was spending a whopping $220 million to support so-called “racial justice.” Soros provided a statement on the $220 million initiative and chillingly painted America as being systemically racist:

‘We recognize that the struggle to dismantle systemic racism is an ongoing one; it has existed from the dawn of the republic to the present day, and is embedded in every level of government and in our penal and justice systems.’

His efforts to defund the police are an offshoot of his racially charged, anti-American bent.