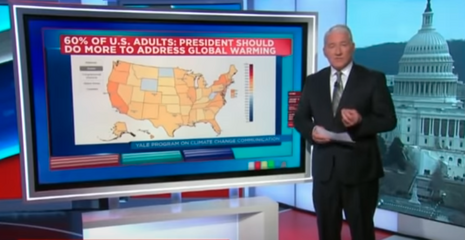 CNN announcing its “Climate Crisis” town hall after Project Veritas exposed its plans for pushing climate propaganda post-COVID revealed just how much of a farce the network’s eco-extremist narrative is.

A new story by CNN was plastered with a headline that reeked of the network’s typical agitprop: “CNN to host climate crisis town hall with Biden administration officials.” The April 21 piece praised how the town hall was slated to coincide “with this week's celebration of Earth Day and will come the day after the Biden administration's conference on global warming.” CNN proceeded to fawn over how “the Biden administration has made climate a key focus” from the outset. But Project Veritas recently unearthed key quotes by CNN Technical Director Charlie Chester exposing CNN’s “Climate Crisis” town hall as a bad joke: “‘[O]ur next thing is going to be for climate change awareness ... That's our next pandemic-like story that we'll beat to death...Fear sells.” No kidding.

CNN used the panic-laced term “climate crisis” a grand total of five times throughout the article, including the headline.

CNN’s latest story suggested the network is either living under the proverbial rock or is content with brazenly wearing its propaganda on its sleeve. CNN wrote, “Before taking office, Biden in December announced his climate team, in a historic display of the then-President-elect's effort to prioritize his administration's response to the climate crisis.” [Emphasis added.]

CNN couldn’t contain its pro-Biden bent and praised his “executive actions to rejoin the Paris Climate Accord, cancel the Keystone XL pipeline and direct agencies to review and reverse more than 100 Trump actions on the environment.” Of course, CNN mentioned nothing in the news item about the thousands of jobs that Biden erased when he nuked the Keystone XL. Even CNN host Fareed Zakaria admitted recently that Biden’s executive actions on climate change were killing U.S. jobs.

The enormous economic cost that Biden is incurring with his eco-extremist agenda seemed to fall on deaf ears for CNN. Instead, the network elevated Biden’s dedication to “environmental justice.” CNN wrote:

Since the early days of his administration, Biden and other administration officials have emphasized that the White House is taking a ‘whole of government’ approach to climate change. They've also underscored that they believe the President's actions will help spur job growth, and categorized people working in industries vulnerable to job loss, such as coal miners, under their umbrella of environmental justice.

The Wall Street Journal Editorial Board had a different opinion of Biden’s “Green New Deal, In Disguise.” The Editorial Board wrote: “Mr. Biden says his plan will ‘create millions of good jobs,’ but his anti-carbon policies will destroy many more in fossil fuels and carbon-intensive industries.”

Conservatives are under attack. Contact CNN at 1-(404)-827-1500 and demand the network stop its crusade to sell “fear” on climate change to its viewers and readers.