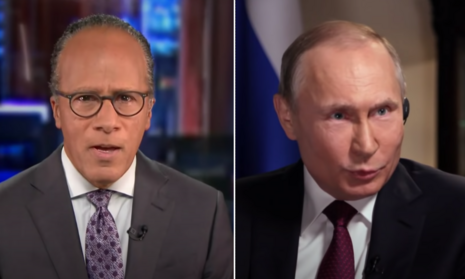 The story, headlined “Putin rejects Trump's criticism of Hunter Biden's business,” was a repost from liberal outlet Reuters. The article argued that “Russian President Vladimir Putin said on Sunday that he saw nothing criminal in Hunter Biden's past business ties with Ukraine or Russia, marking out his disagreement with one of Donald Trump's attack lines in the U.S. presidential election.” The sub-headline for the piece was just as bad: “The Russian president took the time to knock down what he made clear he regarded as false allegations from Trump about the Bidens.” Did NBC News forget that NBC Today co-host Hoda Kotb had just pushed a conspiracy theory that Hunter’s laptop discovery was part of a “Russian disinformation effort aimed at influencing the U.S. Election”?

Even when Director of National Intelligence John Ratcliffe shot down that theory, NBC News dismissed him and proceeded to push the theory anyway. The outlet apparently didn’t believe Putin trying to gaslight Americans on Hunter Biden’s actions in Ukraine was disinformation.

The outlet even promoted the story on Twitter: “Russian President Putin says he saw nothing criminal in Hunter Biden's past business ties with Ukraine or Russia, marking out his disagreement with one of President Trump's attack lines in the U.S. presidential election.” 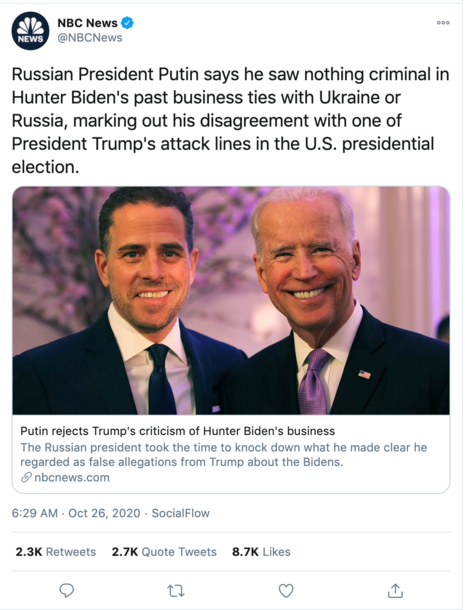 Notable blue checkmarks on Twitter were not having it with the apparent hypocrisy at NBC News.

RealClearPolitics co-founder and president Tom Bevan went for the jugular: “Wait a sec. Dems have been screaming the Hunter laptop scandal was a Russian disinfo campaign. (Biden just said it on 60 Minutes last night). Now the media is quoting Putin as a character witness to knock down these ‘false allegations’? The mind reels.”

The Trump Organization Executive Vice President Donald Trump Jr. also lambasted NBC News for its apparent lack of self-awareness: “Now the media is letting Putin run cover for Joe Biden.... PUTIN.” He continued: “I’m sure that he [Putin] doesn’t have a lot more leverage over the Biden’s tucked away for a rainy day. Joe is compromised like no other person to have ever run for president.”

The Daily Caller tweeted sharply: “And just like that, Putin became a trustworthy source again.”

The Federalist co-founder Sean Davis scourged NBC News for agreeing with Putin: “Mainstream media and Vladimir Putin agree: pay no attention to all the evidence of Hunter and Joe Biden's corruption. Don't take my word for it: they admit what they're doing right there in the headline.”

Conservatives are under attack. Contact NBC News (212- 664-6192) and demand it commit to fair reporting and investigate Hunter Biden’s business dealings instead of continuing its obvious bias in defending the Bidens.