Yahoo! News republished absurd claims that the United Nations deleted a 14-year old article seemingly promoting the economic benefits of world hunger because it was “satirical.” 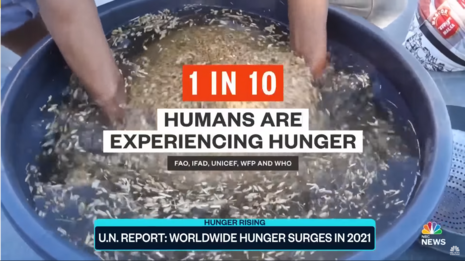 The 2008 article headlined “The Benefits of World Hunger” caused an eruption of comments on Twitter for seemingly defending certain aspects of hunger for global elites. But the UN Chronicle issued this July 6 tweet in an apparent attempt to cover up the story: “This article appeared in the UN Chronicle 14 years ago as an attempt at satire and was never meant to be taken literally.” Yahoo! News republished a NextShark article that apparently bought the UN’s excuse, hook, line and sinker. NextShark even cited retired University of Hawaii Professor George Kent’s previous publications as evidence that the whole thing was “political satire.” Kent, the author of the UN article that recently went viral on Twitter, told MRC Business that the “satirical” characterization was false. He stated unequivocally that his op-ed was “never intended as satire” via email.

“Research into Kent’s previous publications suggest that the article is actually a form of political satire, similar to Jonathan Swift’s satirical essay, ‘A Modest Proposal,’” NextShark reporter Chandler Treon wrote. Swift famously suggested in “A Modest Proposal” that poor Irish parents sell their children as food to wealthy families. Kent unambiguously stated that his publication was not satire, however. “No, I never intended it as satire,” the retired professor told MRC Business. “I did not hope that it would be read as praise for hunger. My main point was and still is that some people benefit from the existence of hunger in the world. That helps to explain why hunger is so persistent in many places.” [Emphasis added].

Some on Twitter called out the UN for taking down the article. Political commentator Mike Cernovich tweeted: “The UN removed a page from its site entitled - The Benefits of World Hunger[.] Fact checkers will say the page never existed.” Climate Depot Founder Marc Morano tweeted: “UN deletes article on ‘benefits’ of world hunger after CFACT reporting.”

Morano also slammed the UN’s deceptive attempt to bury Kent’s article in exclusive comments to MRC Business: “The UN's attempt to spin the article as satire is absurd and is nothing more than covering their behinds when they faced huge outcry over the article.”

Cernovich shared quotes from Kent’s article online. “For those of us at the high end of the social ladder, ending hunger globally would be a disaster. If there were no hunger in the world, who would plow the fields?Who would harvest our vegetables?“

- “For those of us at the high end of the social ladder, ending hunger globally would be a disaster. If there were no hunger in the world, who would plow the fields?Who would harvest our vegetables?“
https://t.co/KFq3QN7a7J

Yahoo!News and NextShark did not respond to requests for comment from MRC Business.