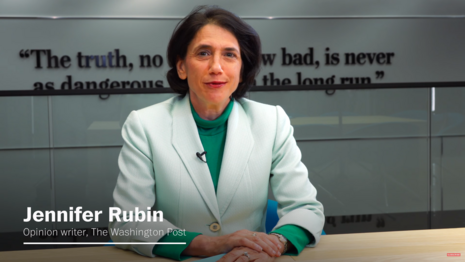 Washington Post opinion columnist Jennifer Rubin absurdly claimed that “Biden’s economic record is extraordinary, but it is marred by inflation.” That’s like pretending an athlete is healthy except for the fact that they’re “marred” by a torn ACL and a broken wrist.

The self-described “NeverTrump” and “pro-democracy” writer Rubin conceded that inflation is “bad news for Democrats’ chances in the midterms” in an April 3 op-ed. But she attempted to paint a rosy picture from there. She added: “[B]ut if the Fed brings down inflation without driving the country into a recession, Biden’s economic record may be viewed as one of the most successful in history,” [emphasis added].

What reasons did Rubin claim were behind Biden’s “successful” economy? The economy added 431,000 jobs in March and wages have “surged,” she fawned.

But Rubin almost immediately undercut her own claims. In her own words, “inflation is rising faster” than wages. She even wrote that many “Americans who never lost their jobs during the pandemic may be in a worse position now than before the economy tanked. Couple that with an almost daily reminder that the cost of food, gas, housing and most everything else has gone up, and it’s easy to understand why so many people think the state of the economy is poor despite record-level job creation.”

How can Rubin put “Biden’s economy is extraordinary” in her headline when prices for food, gas, housing and pretty much everything else have shot way up, as she conceded? And Rubin’s emphatic victory lap on the March jobs numbers was premature. The columnist’s very source for the jobs numbers — the Bureau of Labor Statistics — wrote in its most recent report, “employment is down by 1.6 million” from its “pre-pandemic level in February 2020.”

Not everyone fell for Rubin’s pro-Biden propaganda, however. One user wrote: “If it weren’t for inflation, soaring gas prices, record crime wave, a disastrous wide open southern border, and starting WWIII with gaffes - this president’s performance would be unmatched.”

If it weren't for inflation, soaring gas prices, record crime wave, a disastrous wide open southern border, and starting WWIII with gaffes - this president's performance would be unmatched.

Surprisingly, even the CNN commentator Scott Jennings mocked Rubin’s story: “If it weren’t for the temperature, the surface of the sun would be an amazing vacation spot.”

If it weren’t for the temperature, the surface of the sun would be an amazing vacation spot. https://t.co/3VCTGokCtk

And the comedian Jimmy Dore exposed the true ridiculousness of Rubin’s headline by resurfacing an old joke, “Other than that Mrs. Lincoln, how did you enjoy the play?”

Other than that Mrs. Lincoln, how did you enjoy the play? https://t.co/xCgbYbcDgD

Twitter users clearly had strong opinions about Rubin’s article. The Post’s tweet of Rubin’s story was ratioed on the platform, meaning that the number of comments was higher than the number of likes. As of publication, the post was slapped with 3,858 comments compared with just 3,700 likes.

It’s worth a reminder that Rubin once called Americans voters “stupid” for criticizing Biden’s handling of rising gas prices because certain Americans dared to have common sense.

Conservatives are under attack. Contact The Washington Post at (202) 334-6000 and demand it report fairly on Biden’s disastrous economic policies.