CNN used the suffering of natural disaster victims to push its obsession with climate change.

She described devastating stories of natural disasters and how they affected the mental health of the victims and, unsurprisingly, connected their suffering to climate change.

“With floods -- as well as storms, heat waves and droughts -- expected to increase in frequency thanks to climate change,” she argued “the impact such trauma may have on the minds of those affected is something doctors, policy makers and governments are considering when planning services to help populations at-risk.”

Senthilingam told the story of Heather Shepherd whose house in England flooded in a town that, in Senthilingam’s words, “has a history of flooding” and still she blamed climate change.

Senthilingam also cited Susan Clayton, a professor of psychology, who claimed that even slower effects of climate change bring “consequences such as aggression and violent behavior associated with higher temperatures.”

In this chart, she broke down different “potential outcomes” with the corresponding climate-change-induced “environmental issue.” 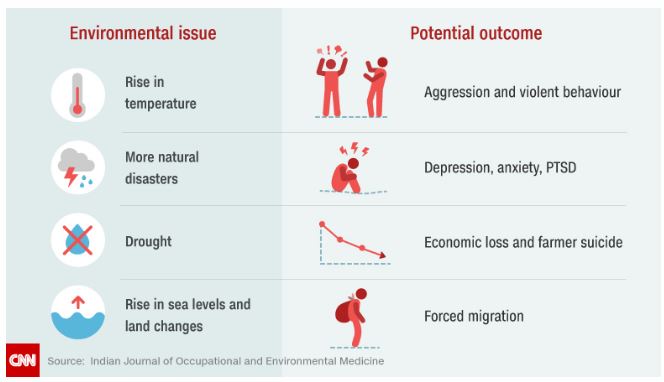