CNN Money tried to have it both ways on “Trumponomics,” blaming bad currency news on the new president the same day it refused to credit him for any positive impact on the jobs report.

On Feb. 3, CNN Money blamed President Donald Trump’s rhetoric for a weaker dollar, but ignored the possibility his rhetoric positively impacted jobs in January. Maybe, that’s why Trump and others have dubbed CNN “fake news.” Both stories were labeled “Trumponomics.” 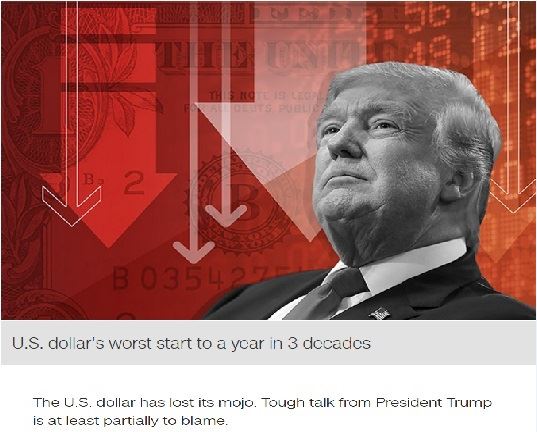 Gillespie said that the U.S. added 227,000 jobs which was well above expectations of 157,000. On Feb. 3, American Enterprise Institute’s Director of Research for Domestic Policy Kevin Hassett appeared on CNBC’s Squawk Box and touted Trump’s effect on the jobs numbers.

“We got a friendly business climate. People want to come back and start operating their businesses here, and you're starting to see that in the data,” Hassett said.

But Gillespie’s article excluded the theory that Trump’s economic rhetoric had helped job creation. That perspective was nowhere in his article. Instead, he cited an economist from the Economic Policy Institute who said Trump “inherited” this “economy on its way to full employment.” 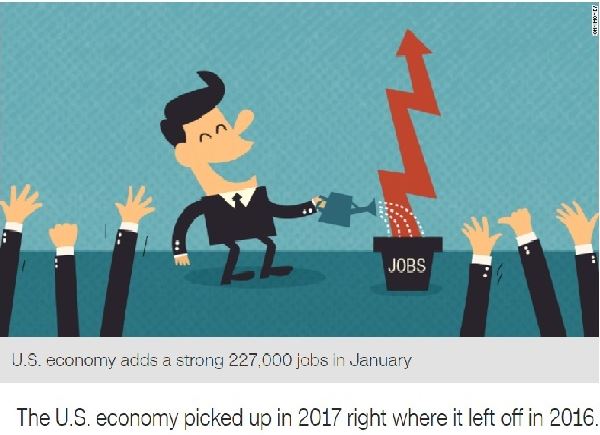 Egan’s piece revolved around the idea that the downturn of the U.S. dollar can be blamed “... in part to Trump's complaints that the strong dollar is ‘killing’ the U.S. economy, the U.S. dollar retreated 2.6% against a basket of currencies in January.”

The two stories’ imagery also illustrated CNN’s anti-Trump bias. For the story about the weaker dollar they employed a picture of Trump with a negative red background and downsloping arrows. But for the positive jobs story, instead of Trump they used an animation of cartoon businessmen.

Anti-Trump bias is common at CNN’s cable network too. On Feb. 1, CNN let Democrat House Minority Leader Nancy Pelosi bash Trump’s Supreme Court nominee Neil Gorsuch without challenge. They have also gave a platform to actors who vehemently opposed Trump to raise money for causes against him and his policies.