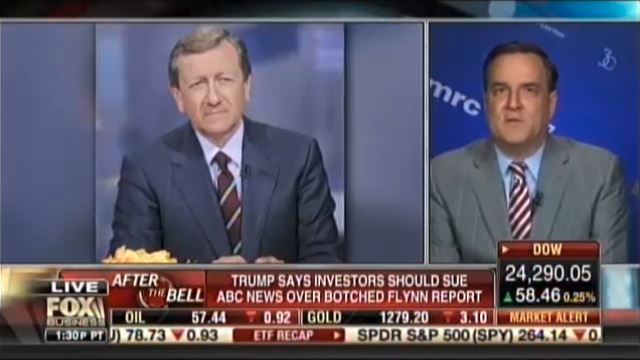 ABC proved its network has a "fake news" problem, after false reports about a former Trump advisor led to a correspondent's suspension.

The incident reflected on ABC as a whole because it took the network so long to acknowledge and correct the error, according to MRC Vice President of Business and Culture Dan Gainor. He said it should also leave people wondering “how can you trust anything” from ABC.

ABC Chief Investigative Correspondent Brian Ross incorrectly reported on Dec. 1, that former national security advisor Michael Flynn was prepared to testify that Donald Trump asked him to contact Russians. If that were true, it would have been a bombshell revelation.

But ABC got it wrong. So wrong, it suspended Ross for four weeks without pay beginning Dec. 2. In reality, Trump made that request after he had already won the election.

It took ABC a full day to admit the claim needed “correction,” not just “clarification.”

“It’s not just what he did that was wrong, it’s ABC’s editorial process that let it get through, it’s ABC’s reluctance to call it an error that needed correction,” Gainor said on the Dec. 4, Fox Business’ After the Bell, “At that point if you’re an investor, you’re wondering, ‘how can you can trust anything that ABC’s putting out?’”

Ross’ report was especially egregious given his personal history of false reporting, After the Bell co-host Melissa Francis suggested.

She cited Ross’ 2012 report that falsely accused a Tea Party member of being the responsible for the movie theater mass shooting in Aurora, Colorado.

Gainor had another example, citing ABC’s “pink slime” controversy which began in 2012. ABC’s reporting about Beef Products Inc resulted in a lawsuit and a huge settlement in the company’s favor.

The Walt Disney Company, owner of ABC, reportedly paid out at least $177 million in settlement fees to the beef company in August 2017. A lawyer representing the beef company told The New York Times the settlement was much larger, and that Disney’s insurers “are paying the rest.”