Networks Ignore Clinton Foundation Conflict of Interest in 95% of Stories 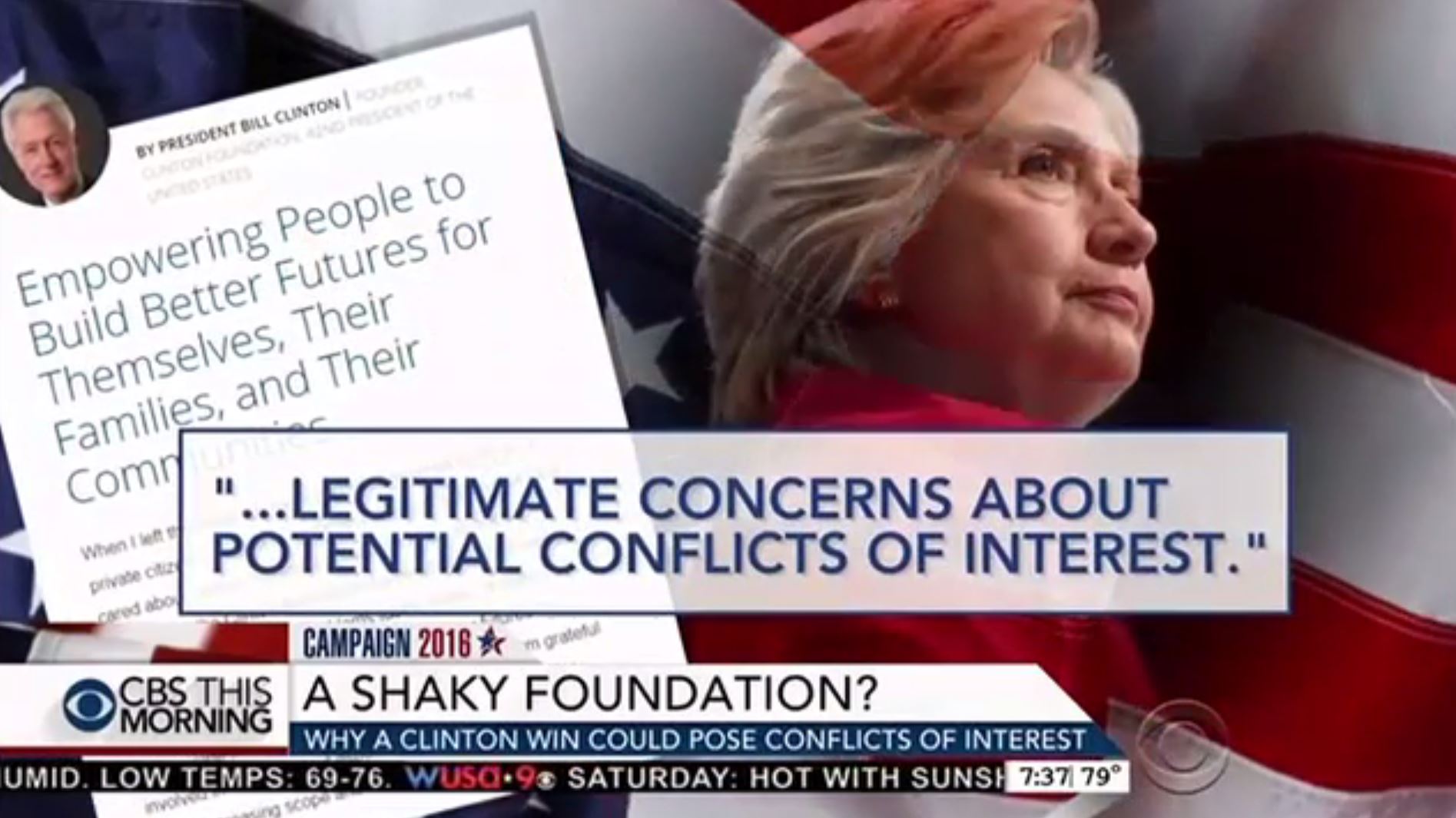 The Clinton Foundation was such a source of conflict during the 2016 presidential election that print media outlets and even some Democrats said the Clinton family should leave the foundation. The liberal Minnesota Star Tribune even said “American voters” should be concerned about the “appearance of a conflict of interest.”

But the broadcast networks ignored the conflict of interest afflicting the Democratic nominee in 95 percent of their stories.

Instead, the networks pushed the Clinton campaign’s version; that the foundation was being “targeted unfairly,” that conflict of interest allegations were “absurd,” and that reports questioning Clinton’s actions as Secretary of State were “misleading.”

The Hill found multiple “government watchdog groups” warning the Clinton family to cut ties with the foundation “to eliminate any perception that Clinton Foundation donors could use their wallets to gain undue access to a Hillary Clinton White House.”

While the networks covered the reports from Judicial Watch and The Associated Press, they almost entirely failed to report the “very serious” conflicts of interest created by the Clinton family’s close relationship to the foundation.

Between the release of Judicial Watch’s findings on Aug. 9, and Sept. 9, ABC, NBC, and CBS morning and evening news shows mentioned both Hillary Clinton and the Clinton Foundation in 62 stories, but only three stories (all on the morning news shows) suggested that the Clinton family should do anything more to avoid ethical problems if Clinton is elected president. 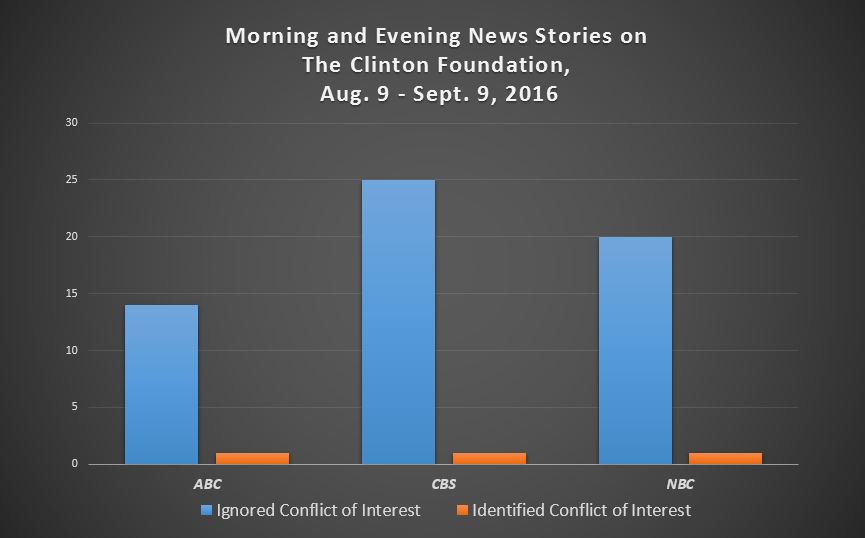 In other words, more than 95 percent of the reports did not even question the ethics of the Clinton family remaining involved with the Clinton Foundation.

Instead, the networks acted as a Clinton mouthpiece, repeating statements from the campaign and the Clinton Foundation.

Congressional correspondent Nancy Cordes used her time on CBS This Morning on Aug. 10 to explain in detail how the Clinton campaign responded to the Judicial Watch report.

Major Garrett, the chief White House correspondent for CBS used the same quote the next day on This Morning, and ABC News Chief Investigative Correspondent Briant Ross repeated it on an Aug. 23 Good Morning America.

An Aug. 25 CBS This Morning broadcast focused on Clinton’s claim that the AP report was “misleading because it excluded nearly two thousand other meetings.”

Cordes again repeated Clinton’s rhetoric on the Sept. 6 CBS Evening News With Scott Pelley. “Clinton argued Republicans are on an endless fishing expedition, even after the State Department and the FBI determined there was no wrongdoing,” Cordes said.

David Wright, an ABC News correspondent, used a Sept. 5 World News Tonight with David Muir broadcast to highlight how “Clinton pushed back on any suggestion her time at the State Department was tainted by conflict of interest with the Clinton Foundation.”

World News Tonight then played a clip of Clinton saying “The State Department has said there’s absolutely no evidence of any kind of external influence, and I, um, know that to be the fact.”

Only three news reports (from Good Morning America, Today, and This Morning) rejected the month-long trend of ignoring the ethical problems created by the Clinton Foundation.

One exception was ABC’s Political Analyst, Matthew Dowd. On the Aug. 23, Good Morning America, he recommended a “clean break” between the Clintons and their foundation.

“[I]t reinforces this idea you can’t trust Hillary Clinton,” and “points to Washington and says it’s corrupt, it’s out of control,” Dowd said.

NBC News Chief Foreign Affairs Correspondent Andrea Mitchell reported on the Aug. 24, Today Show, the Clinton Foundation was facing pressure to “close down to avoid any future conflicts” if Clinton is elected president.

But Mitchell lamented the existence of a controversy over the Clinton Foundation “despite all of its good works.”

“Officials have long acknowledged they need to curb their donor policy if Hillary Clinton becomes president and, though they announced those changes last week, there are still questions about potential conflicts of interest it could present for a Clinton White House,” Goldman said.

Goldman said current plans to curtail the Clinton Foundation if Clinton is elected president “don’t necessarily solve all the potential conflicts of interest.”

For example, “a third of [Clinton’s] campaign fundraisers have been held by foundation donors,” Goldman reported.

In contrast to the networks, some print outlets and even some Democrats complained about the ethical conflict created by Hillary Clinton’s continued involvement with the Clinton Foundation.

The editorial board of Minnesota’s liberal Star Tribune said on Aug. 26, “It’s past time to shut down the Clinton Foundation.”

“The time for the Clintons to make a clean break with the foundation was when Hillary Clinton became secretary of state,” the editorial board wrote. They pointed out that if even Chelsea Clinton remains connected to the foundation, it would be “an irresistible lure for donors hoping to gain favor.”

“If the Clintons are not concerned about the appearance of a conflict of interest, American voters should be,” the editorial board stated.

The New York Times editorial board similarly questioned the relationship between Clinton and the foundation on Aug. 30.

“Achieving true distance from the foundation is not only necessary to ensure its effectiveness, it is an ethical imperative for Mrs. Clinton,” The New York Times editorial stated.

“If Mrs. Clinton wins, Bill and Chelsea Clinton should both end their operational involvement in the foundation and its affiliates for the duration of her presidency, relinquishing any control over spending, hiring and board appointments,” they continued.

The editorial board also called for the Clinton Foundation to “ban contributions from foreign and corporate entities now,” instead of waiting until Clinton wins, as the current plan states.

According to San Francisco Chronicle senior political writer Joe Garofoli, “Folding the foundation would provide the cleanest break.” Garofoli’s Aug. 27, piece include less severe recommendations as well. He said the Clinton’s could “Let someone else run it,” “Break up the foundation,” or “Get a new board of trustees.”

Though each of those possibilities “have problems,” said Garofoli.

USA Today White House correspondent Gregory Korte wrote that Clinton’s current plans to distance herself from the Clinton Foundation if elected “may not be enough to mitigate the unprecedented nature” of her relationship to the foundation.

Even some Democrats are weighing in.

According to an Aug. 31, Wall Street Journal news report, Rep. Raul Grijalva, D-Ariz., said “the foundation has become a distraction, politically speaking,” and that the foundation should “cut the ties to the family.”

William Galston, a scholar at the liberal Brookings Institution who has donated to the Clinton Foundation and worked in the Bill Clinton White House even told the Journal that the “most prudent course would be to begin her presidency with a clear line of separation between the Clinton family and foundation.”

Other Democrats who spoke to the Journal anonymously said Clinton would “repeatedly be pushed on the defensive as president,” with invitations and appointments being “scrutinized for ties to the foundation.”

A Democratic National Committee finance panel member said “it would be an absolute conflict of interest for [the Clinton Foundation] to remain under the leadership of her family.”

“I would certainly suggest that as president of the United States she should cease all operations, all contact, with the Clinton Foundation,” Sanders said on Meet the Press Sept. 4.

Chelsea and Bill Clinton announced they will both step down from the Clinton Health Access Initiative, which is one arm of the Clinton Foundation, if Clinton wins the presidency.