NBC Meet the Press host Chuck Todd announced on Sunday they were starting a new series called "Meet the Money: The Billionaire Donors." They started with GOP-backing Sheldon Adelson. When will they get to George Soros?

In an effort to revitalize and unify the far-left Democratic party, progressives have relied on the very thing they often criticize -- the deep pockets of a billionaire supporter. Agenda supporters were linked to at least $159 million dollars in donations or political contributions from Soros.

Many of those self-proclaimed progressives will gather on the steps of the U.S. Capitol May 12 at 3 p.m. to celebrate a new, far-left “Progressive Agenda.”

According to Rolling Stone, New York City Mayor Bill de Blasio held a closed-door meeting at his mayoral residence on April 2, 2015, to create the Progressive version of the 1994 Republican “Contract with America.” De Blasio called his update the “Progressive Agenda” and its stated purpose was to address “income inequality” in the U.S.

A dozen far-left leaders attended the closed-door meeting, including George Soros’ son Jonathan Soros. Jonathan claims to support removing money from politics, yet hypocritically serves on several boards at the Open Society Foundations (OSF). OSF has given more than $550 million to liberal organizations.

In an April 6 interview on MSNBC’s Morning Joe, de Blasio confirmed that key elements of the Progressive Agenda included: a progressive tax (driven by the Buffett Rule -- which argues that wealthier individuals should have to pay higher taxes), universal free pre-kindergarten, and a $15 minimum wage.

De Blasio said the full Agenda would be unveiled at the May 12 event in Washington, D.C.

During the MSNBC interview, hosts Mika Brzezinski and Joe Scarborough were incredibly supportive of both the mayor and the Agenda. Scarborough remarked, “I can’t wait!” in reference to de Blasio’s potential endorsement of Hillary Clinton for president.

Scarborough lavished more praise on de Blasio, saying “I think it’s absolutely fascinating what you’re doing. You’re doing what a lot of Democrats have been afraid to do over the past 20, 25 years.”

Brzezinski chimed in with her own support of specifics of the Agenda. She argued that the minimum wage must be raised to $15 because people “can’t live on it” as it is. When de Blasio lamented that Democrat New York Gov. Andrew Cuomo proposed to raise the New York City minimum wage to only $11.50, Brzezinski added, “We need to change his mind!”

Morning Joe’s hosts should have been more critical. The Agenda is supported by some of the nation’s most radical left-wing individuals, nearly all of whom have ties to George Soros. Neither Brzezinski nor Scarborough called any of the links into question.

The list of connections between the supporters of de Blasio’s Agenda look like a family tree -- with George Soros as the patriarch. In all, the Agenda’s supporters have ties to $159 million in Soros donations, which includes both donations to charity and contributions to political candidates.

Arguably the strongest tie between George Soros and the Agenda is Soros’ son, Jonathan Soros, who attended the April 2 meeting. His son is involved with multiple groups that he’s funded. Soros gave $5.2 million to the New America Foundation, where Jonathan is a board member. Jonathan co-founded the Fair Trial Initiative, a group George Soros gave $137,500 to. Jonathan is also a Senior Fellow at the Roosevelt Institute, where vanden Heuvel serves as a board member. Finally, Jonathan is on the U.S. Programs Board and the Global Board at Soros’ Open Society Foundations. According to the Foundations’ website, the various boards “guide the strategy, budgets, and direction of our work.”

Jonathan isn’t the only link to George Soros. In 2013, Newsweek reported that Soros, as well as Stiglitz, vanden Heuvel, former Democratic presidential candidate Howard Dean, and actress Susan Sarandon endorsed de Blasio’s mayoral campaign. Now, all these individuals either verbally support or were involved in drafting the Agenda.

Politico reported that de Blasio’s Agenda “includes the ideas of economist Joseph Stiglitz.” And Stiglitz has very close ties to Soros through the Institute for New Economic Thinking (INET). Stiglitz is currently on the advisory board at INET and is also credited with playing an important role in its founding. Soros was a co-founder of INET and has also given the organization $50 million.

Stiglitz has also been a professor at Columbia University since 2001. In that time, Columbia received $10.7 million from Soros.

Vanden Heuvel, editor and publisher of The Nation, is a member of the Council on Foreign Relations and has served on the boards on five other organizations which have received a total of nearly $6.5 million from Soros since 2000. Soros has also given $127,000 to Nation Institute, and $675,000 to Foundation for National Progress--both of which fund The Nation magazine.

Dean, the former governor of Vermont and former Chairman of the Democratic National Committee (DNC), was also closely tied to Soros. Dean received campaign donations from Soros in 2003 and 2004. Finally, Soros gave more than $80,000 to the DNC, for which Dean was chairman.

Liberal activist Marian Wright Edelman is reported to be another individual attending the Agenda’s unveiling on May 12, according to Politico. Edelman is the founder and president of Children’s Defense Fund (CDF), which has received $1.73 million from Soros from 2011 to 2015. Hillary Clinton has also been heavily involved with CDF and was honored at their 40th Anniversary in 2013.

Former Green Jobs Czar Jones also attended the closed-door meeting to draft the Agenda and various groups he founded had Soros financing. Soros gave $2.5 million to “Rebuild the Dream,” an organization Jones founded with MoveOn.org. Soros gave another $1.78 million to Jones’ Ella Baker Foundation for Civil Rights, and $250,000 to Jones’ group Green for All.

Jones is a senior policy adviser at Green for All, a political commentator at CNN, and a senior fellow at the Center for American Progress (CAP). Soros donated nearly $9.3 million to CAP. Tom Steyer, another liberal billionaire much like Soros, donated $3.85 million to CAP between 2008 and 2014. 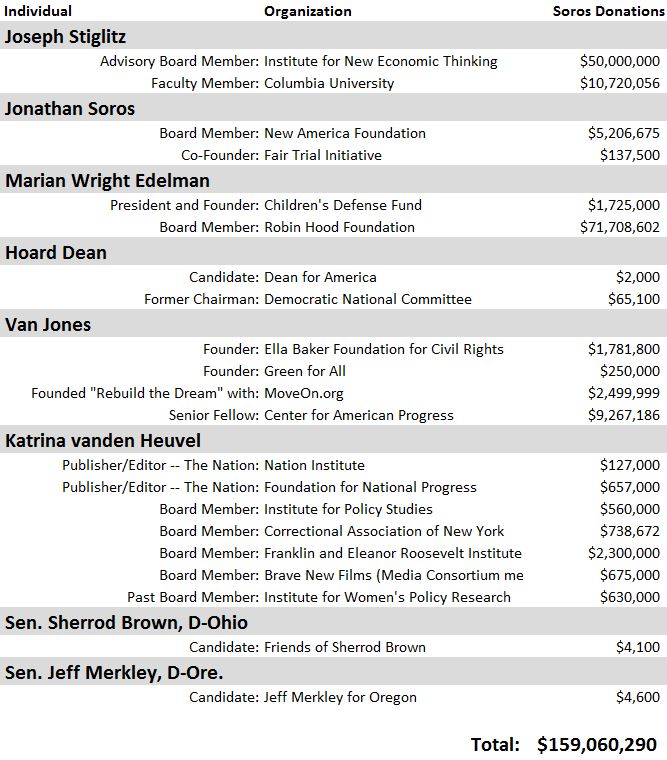