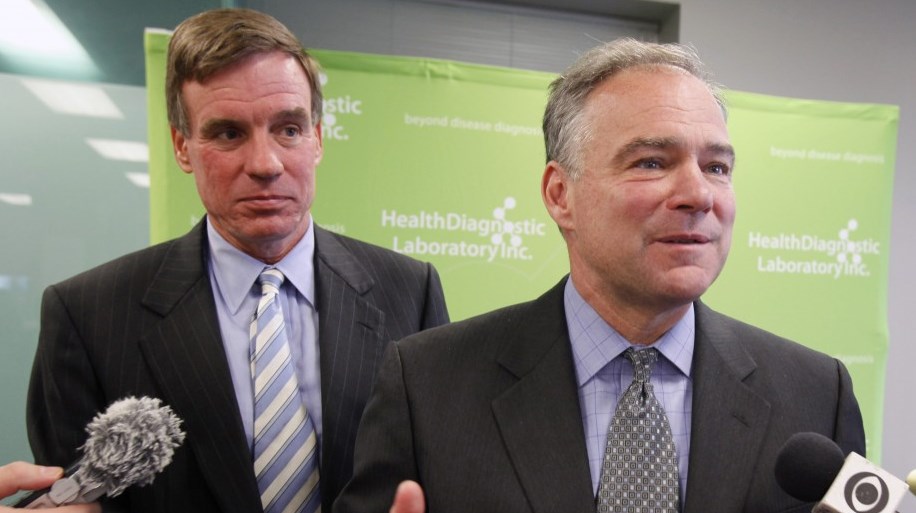 The latest scorecard from the American Conservative Union is out, and the voters of Virginia might want to file a complaint about truth in advertising with the press corps. Senators Tim Kaine and Mark Warner have routinely been portrayed in news reports as “moderates” and “centrists.” But after two years in the Senate, Tim Kaine has a perfect zero on the conservative scale. Mark Warner has a lifetime score of 10.33 percent conservative, but his last two annual scores have been a 4 and an 8. They could be mistaken for Barbara Mikulski.

Far-left is middle of the road on the media spectrum. The Washington Post has been especially guilty of suggesting over the years that Kaine was as pious as conservative stalwart Ken Cuccinelli, a man they place on the “far right.” In 2012, the Post profile of his GOP opponent George Allen suggested he was seen as a “colossally insenstive brute,” but this is how the Post began a Kaine profile:

“It’s not unusual, on an election-year Sunday, to find a white candidate in a black church. But Tim Kaine, swaying this month to the gospel groove at St. Elizabeth Catholic Church in a poor Richmond neighborhood, wasn’t on the campaign trail. He was taking a break from it at his home parish.”

Tim Kaine has a perfect 100 score from the NARAL folks, and and perfect 100 with the gay-left Human Rights Campaign. But to the Post, he’s practically the Pope’s right hand, swaying in the pews at Mass. A few weeks ago, Kaineand Warner signed a letter to the HHS Secretary (with other liberals like Barbara Boxer) complaining about insurers failing to provide proper payment for contraceptives through Obamacare.

The Post did this in 2005, too, when Kaine first ran for Governor: “Kaine, the Democratic candidate for governor of Virginia, said that teaching at a fledgling Jesuit school in El Progreso [Honduras] gave his life direction, inspiring him to public service and rekindling his devotion to Catholicism.”

When the Post touts your deep Catholic roots as positive, it probably means you’re a liberal opposed to Catholic orthodoxy.

Mark Warner also scores 100 on the libertine-left scale at NARAL and HRC. When Warner first announced a campaign for the Senate in 2007, Anita Kumar of the Washington Post pitted him against former Republican Gov. Jim Gilmore this way: “Do they prefer a social conservative who cut taxes but left a deficit, or a centrist businessman who balanced the budget but raised taxes?” He was “pro-business,” not liberal.

In another story, Post reporters wrote “Warner, 52, a self-described moderate Democrat, will make his announcement in an e-mail to supporters Thursday.”

So if he described himself so falsely, why didn't the Post expose him? Because the Post subscribes to the falsehood.

When he was endorsed by former Sen. John Warner (allegedly a Republican) in 2014, the Associated Press said “he praised his successor, also a centrist, for seeking bipartisan solutions.” That’s what the Post said in an editorial endorsing Mark Warner last year: he had “a nearly obsessive search for creative solutions and real flexibility in long negotiating sessions.”

Then there’s submerging the campaign news entirely: Warner’s incredibly close race against Ed Gillespie race never drew an A-1 story in the Post during the last three months of the 2014 campaign, except for a dismissive story on how Gillespie was just building name ID for the next race.

Voters could complain about “truth in advertising,” because that’s what the press coverage of Kaine and Warner has been – badly disguised positive commercials about their habitual moderation, pretending to be objective news coverage.