Harvard black-studies professor Henry Louis Gates produces a show for New York PBS superstation WNET called Finding Your Roots. Gates tells celebrities about their ancestors. A few years back, NBC had a show just like this called Who Do You Think You Are? It’s now on cable, on TLC. Why PBS believes it's right to use taxpayer money to copycat commercial television is a mystery. 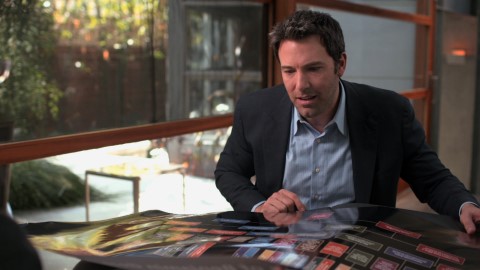 Affleck was one of the celebrities (again: taxpayer funds, to study him?) and his family tree had a slave-holding ancestor. Affleck asked for that information to be scrubbed out of the broadcast. Gates asked Sony chairman Michael Lynton for advice. “Confidentially, for the first time, one of our guests has asked us to edit out something about one of his ancestors – the fact that he owned slaves. Now, four or five of our guests this season descend from slave owners, including [liberal PBS legend] Ken Burns. We've never had anyone ever try to censor or edit what we found. He’s a megastar. What do we do?”

Lynton replied “I would definitely take it out,” demonstrating that Affleck demands greater sensitivity than, say, Thomas Jefferson. But Lynton warned that if that went public, then “it gets tricky.” And so it did. The show aired in November, censored for Affleck (and not for the other celebrities). Then came WikiLeaks.

With Affleck in the headline of this scandal, the TV news networks picked it up, and Affleck was forced to apologize for pressuring Gates. “I lobbied him the same way I lobby directors about what takes of mine I think they should use. This is the collaborative creative process.”

When “free speech” liberals demand censorship, they call it a “collaborative creative process.”

What makes the scandal more blatant is the show that actually aired. While Gates omitted the slave-owning ancestor, he played up Affleck’s mother, who was a Freedom Rider in the Sixties for black civil rights. Affleck was shown proclaiming “She definitely imbued us with a very strong sense of social justice and social equality and kind of things that I've carried with me, but always using other people as examples, never herself.”

PBS ombudsman Michael Getler openly mocked PBS as “not credible” for trying to skate past this fiasco by putting out a statement about how “It is clear from the [e-mail] exchange how seriously Professor Gates takes editorial integrity” and that his censoring at Affleck's request was “an independent editorial judgment to choose the most compelling narrative.” But that's nonsense. Gates agreed to censor the truth.

Getler defended the network by making the usual slippery claim that PBS isn’t really a network, it’s “basically a distribution system for films and programs produced by independent   filmmakers or by a handful of big member stations.” He added this odd defense: “I think one reason many people don’t realize PBS is nothing like a broadcast or cable network is that PBS rarely, if ever, explains itself publicly, other than to ask for money.” Even so, he blamed PBS for being “asleep at the switch” and insisted everyone involved deserved the scandal.

It’s quite rare that the major media pay this much attention to the shady self-dealing of the Left inside “public” broadcasting. Ben Affleck unintentionally demonstrates what passes for “editorial integrity” at our taxpayer-subsidized liberal sandbox.