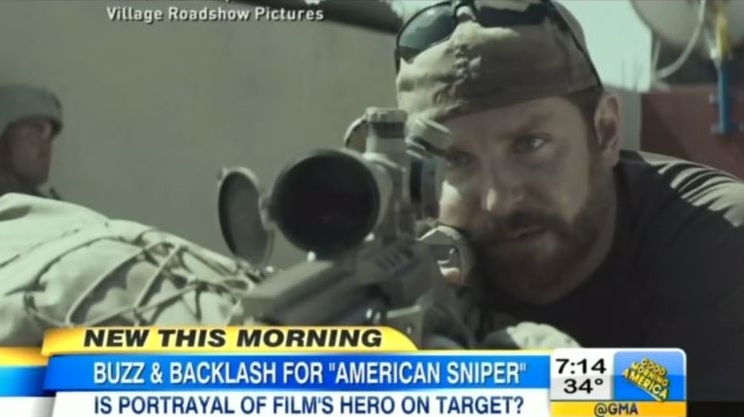 Clint Eastwood's movie “American Sniper” dominated the box office race on the long Martin Luther King weekend with a gross of $103.5 million. That's more than twice as high as the previous January opening weekend record. It received a rare "A+" CinemaScore from people who saw it, suggesting word-of-mouth will be wildly positive.

This movie wasn’t very controversial – until, that is, the film earned six Oscar nominations and had that amazing weekend at the box office. That's when the hostility erupted from leftist Hollywood types on Twitter, hell-bent on pushing back against the wave.

Radical director Michael Moore slammed American snipers in general on Twitter: “My uncle killed by sniper in WW2. We were taught snipers were cowards. Will shoot u in the back. Snipers aren’t heroes.” Moore hasn’t made a real movie in six years. He sounded almost desperate for attention.

Actor Seth Rogen – so recently lionized for being at the center of a free-speech fight with North Korea over his comedy “The Interview” – showed he was no First Amendment hero. "American Sniper kind of reminds me of the (Nazi propaganda) movie that's showing in the third act of Inglorious Basterds." Quentin Tarantino’s World War II movie featured a fake film about a German sniper killing Allied soldiers from a clock tower.

This knee-jerk liberal tendency to compare our bravest, most dedicated soldiers to Nazis reminds us of NBC "Parenthood" star Dax Shepard’s Twitter rant about the 2012 movie “Act of Valor,” a movie that starred actual Navy SEALs. He cracked: “Saw ‘Triumph of The Will’ tonight, oh wait, I mean ‘Act of Valor.’ great action.”

The network news reported on the furor with alarming “objectivity,” considering the nature of the smears, but some network stars praised the movie. CBS morning host Gayle King said "I really loved the movie and at the end of the day he saved a lot of lives. Chris Kyle saved a lot of lives." On MSNBC, Mika Brzezinski praised the movie, saying veterans told her it was a very accurate reflection on the difficulties veterans and their families go through.

Faced with the hornet’s nest they kicked, Moore and Rogen quickly backtracked, lamely claiming their comments were taken out of context, which they weren't. Live by the tweet, die by the tweet. Moore said he wasn’t directly referring to the new movie, which is a bald-faced lie.

Rogen protested that he actually liked the film and wrote a new tweet Monday saying he wasn’t directly comparing “American Sniper” with a satire of Nazi films. “Big difference between comparing and reminding,” he wrote. “Apples remind me of oranges. Can’t compare them, though.” Earth to Rogen: if you had said Martin Luther King “reminded” you of a communist, you couldn’t dig out of it by saying you were just comparing apples and oranges.

Movies raging against the Iraq war have failed, dud after dud after dud. But it should be no shock that American audiences like movies about American heroes, complete with their highs and lows. “Zero Dark Thirty” and “Lone Survivor” opened in the same post-Christmas slot in 2013 and 2014, respectively, and they grossed $95 million and $125 million at the box office.

“American Sniper” is now expected to surpass $200 million in ticket sales, demonstrating that the American public has a lot more gratitude for the sacrifices our troops make for freedom than the loudest mouths in Tinseltown.