Correction (July 31 | 14:40): Colbert's wrist was broken. He injured it running around his studio before a show. I regret the error.

Colbert, who was pretending to be gravely hurt and wearing a fake cast on his arm, was ushered in by wheelchair. Shrum, not missing an opportunity to shill for the Democrats, quipped:

“I hope all the suffering has made you more inclined to support national health insurance, so everybody can get the same kind of risk care you do.”

Clever as ever Mr. Shrum. But that was only the beginning.

Colbert immediately turned his attention to what Shrum, the Susan Lucci of political campaigning, is best known for, losing.

A transcript of Colbert and Shrum’s conversation follows. Colbert’s show is designed as a satirical homage to Bill O’Reilly and usually makes fun of conservatives and certainly Shrum knows this. Even so, he’s dead serious about his Bush-stole-Ohio charge.

In last night’s CNN special on their upcoming YouTube debate, Paula Zahn previewed some of the video questions that had been sent in. The topics up for debate last night included faith and values, the environment and gay rights. Zahn led the segment on faith and values with the comment, “we are seeing an amazing variety of questions about faith and values for next Monday’s debate.” Unfortunately the four YouTube questions that followed were anything but a “variety.” The transcript of the questions follows below. 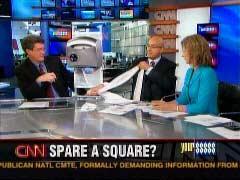 “Alright, now for the moment the world has been waiting for.”

These were the words from Ali Velshi, co-host of last Saturday’s “Your Money” on CNN, to introduce a segment on a brand new invention: the automatic toilet paper dispenser, the newest contender for the title of “least needed product ever.”

By Joe Steigerwald | July 13, 2007 5:47 PM EDT
The summer of media love for Al Gore continues in the Washington Post today. An article by Lori Aratani boasts in the sub-heading that “Al Gore’s film has raised awareness of energy conservation, officials say.”

Tavis Smiley's interview of Michael Moore, aired June 29 on Smiley's eponymous PBS program, is just another reminder of the ridiculous lack of credible journalism which goes on at the taxpayer-funded network.

The interview was nothing more than Smiley lobbing softball after softball straight over the plate while Mr. Moore hit his talking points out of the park on everything from the "far right"to a wage gap between whites and African-Americans.

Smiley’s ceremonial first pitch was enough to clue in viewers that there would be no attempt on Smiley's part on conducting an unbiased or challenging interview. “You have done it again,” Smiley gushed to the veteran political filmmaker.

Not only does advocate for socialized medicine, he also gets to let loose against what he calls the "far right" (anyone who doesn't think socialized health coverage is the answer) and portrays himself as someone who just wants to enlighten on the "facts."

Below is part of the interview (emphasis mine), followed by my analysis:

The Rise of Eco-Chic: 'Plastic Grocery Bags Are Out'

Dateline: San Francisco. A city which HumanEvents.com ranked as the "most liberal city in America" is taking another shot at business and consumer rights and another step towards socialism with it's most recent ban. This week’s victim? The plastic shopping bag.

Meet the Greenes, "an American family trying to do their best to help the environment by living a green life. Take a virtual tour of their earth-friendly home and discover all the ways they conserve resources, pollute less and leave a smaller eco-footprint."

This welcoming banner sounds like something you'd see on Greenpeace.com or Climatecrisis.net (Admit it, you've been there, I go all the time to laugh at the latest ridiculous global warming headlines.)

Unfortunately "Meet the Greenes" is prominently displayed on the Web page of a major news organization. The offender? Statesman.com, the Austin American-Statesman’s home on the Internet.

"Meet the Greenes" is just one of the many delightful headlines in the "Living Green" section.

"An Eco-System Runs Through It" trumpets the June 19 front page headline in the San Antonio Express-News. The Anastasia Ustinova story manages to combine two liberal positions together in the guise of protecting the environment, as the sub-head tells readers that "Fencing threatens critters - and eco system."