NY Times: Michelle Obama ‘a Woman Not to be Contended with So Much as Worshiped From Afar’ 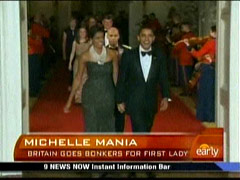 Fawning over First Lady Michelle Obama has been over-the-top, but considering her a "deity" a "goddess," and "a woman not to be contended with so much as worshiped from afar," is a bit much.

Those are the labels Cathy Horyn, the NY Times fashion critic, bestowed upon the First Lady in her Dec. 27 look at the year in fashion.

Horyn compared the straight-forward, "businesslike" style of Sarah Palin to the fashion "insider" style of Obama and surprisingly praised Palin while chiding Obama for not sticking exclusively with American designers.

"Mrs. Obama's choices are all insider, apart from her shorts and those strategically worn plebe numbers from Target and Talbots. If she got any more insider, she'd be backing down a runway," wrote Horyn. "She wears Rodarte, Jason Wu, Sophie Theallet, Narciso Rodriguez, Thakoon, Isabel Toledo and Rick Owens, labels that in terms of creativity and price are at the highest level of fashion. Go much higher and you hit couture."

"In Mrs. Obama, the fashion industry has found a woman it can admire but cannot completely possess. That's because she doesn't favor only one designer or a clique, as her predecessors did," Horyn continued. "Also, she avoids the appearance of being cozy with designers. That's why she's often described in terms reserved for a 1930s screen goddess: ‘regal' and ‘dazzling," a woman not to be contended with so much as worshiped from afar."

NY Times: Michelle Obama 'a Woman Not to be Contended with So Much as Worshiped From Afar'

Studio executives might want to make a New Year's resolution to show less skin in their movies.

A December 29 CNN article reported that a recent study found that "sex and nudity failed to positively affect a film's popularity among viewers or critics and did not guarantee big box office receipts."

"Sex Doesn't Sell -- nor Impress! Content, Box Office, Critics, and Awards in Mainstream Cinema" was published in the journal Psychology of Aesthetics, Creativity and the Arts last month. A Nexis search revealed that ABC, CBS and NBC have not covered this study since its publication.

Researchers analyzed the content of more than 900 films released between 2001 and 2005.

"The top-grossing films in the study included movies like ‘Shrek 2;' ‘Spider-Man;' ‘Star Wars Episode III: Revenge of the Sith' and ‘The Lord of the Rings: The Return of the King,' all of which contained mostly minor to mild sex and/or nudity," reported CNN.

By Colleen Raezler | December 29, 2009 10:18 AM EST
Joy Behar expressed confusion about the success of Sarah Palin's book because, according to the CNN Headline News/ABC talk show host, a lot of the former governor's "base doesn't even read."

Behar slammed Palin, as well as Glenn Beck, Carrie Prejean and other conservatives  during her "look back at 2009" edition of the "Joy Behar Show" that re-aired over Christmas weekend.

Joy Behar: A Lot of Palin Support 'Doesn't Even Read'

For Newsweek writer Jenny Block, it's not Tiger Woods who got himself into the trouble he's currently facing, it's his marital vows.

"What should not be tolerated is hypocrisy - and that's where Tiger's vow of marriage got him into trouble," she argued in a Dec. 10 article. "If you want to be monogamous, great - but don't think you can claim it while you sleep around. It's not fair and, quite frankly, it's exhausting."

Block argued that it's not "surprising" to learn of Woods' affairs because his "entire life is based on winning; on having, doing, and being more ... why on earth would anyone think ‘settling down' was even in his vocabulary?"

But Block has a solution to the problem of adultery.

In what could be an advertisement for open marriages, Block explained that she and her husband "jointly decided that monogamy just wasn't for us" after she had an affair with a woman.

Comedian: Tiger’s Adultery is ‘a Failure of Character’

By Colleen Raezler | December 11, 2009 9:37 AM EST
Tiger Woods' "transgressions" sparked conversations about why men cheat but it took a comedian to pinpoint the basic reason - lack of character.

Comedian Chuck Nice appeared on the "All Guy Panel" during the fourth hour of Thursday morning's "Today" and blasted men who engage in extramarital affairs.

"I've said this before and I will say it again. And no one wants to accept this as an answer, but here is the reason why men cheat. It is a failure of character. That is it," Nice exclaimed.

"End of story. It's a failure of character," he continued. "A man who has the strong, spiritual conviction to say that although I want to do this, I will rely upon a higher power to make sure and strengthen me so that I am able to stand for my vows is the man who will not cheat. Now, that's the end of it."

Comedian: Tiger's Adultery is 'a Failure of Character'

By Colleen Raezler | December 11, 2009 12:00 AM EST
NBC's Kathie Lee Gifford bemoans the lack of 'shame' present in the entire situation.

‘Glambert’s’ Record Sales Indicate Not All Publicity is Good Publicity

While "For Your Entertainment" sold 198,000 copies and took the number three spot on the Billboard charts during its debut week, sales dropped 74 percent in its second week, causing the album to tumble to number 22 on the charts. It was the biggest drop on the Top 200 chart.

"If you're an Adam Lambert partisan, you can try to spin it all you want, but that's just bad," reported USA Today's Brian Mansfield on Dec. 9.  He also noted that only sales of Susan Boyle's album dropped more than Lambert, but even Boyle "still outsold Adam by a margin of more than 10-1."

WaPo’s McCartney: Archdiocese of D.C. Should ‘Cut a Deal’ on Homosexual Beliefs

Apparently the Catholic Church is welcome when it promotes causes near and dear to liberal hearts, but it's shown the door as soon as it takes a hard line against controversial issues like homosexuality and abortion.

Robert McCartney of the Washington Post admitted as much in his Dec. 10 column about the effect legalized same-sex "marriage" could have on the charitable activities of the Catholic Church in Washington, D.C.

"I view the church as a tremendous force for good in the world in many ways, especially in its advocacy for the poor and against violence. The U.S. church supports more ambitious healthcare reform than Barack Obama, does, for instance," he wrote.

"But I part with the church - as many of its members do - on many of positions on sexual issues. Regrettably, those are the ones that religious leaders often seem to care the most about."

McCartney, argued that the diocese is allowing a "dispute over employment benefits," which he claimed "would have little practical effect," to force it to "give up doing valuable, publicly funded work helping the homeless and sick" because the Church does not "want to miss the opportunity, however small, to oppose homosexuals' right to wed."

'Glambert's' Record Sales Indicate Not All Publicity is Good Publicity

WaPo's McCartney: Archdiocese of D.C. Should 'Cut a Deal' on Homosexual Beliefs

By Colleen Raezler | December 10, 2009 12:00 AM EST
Writer admits to being a fan of the Catholic Church as long as it supports liberal causes.

By Colleen Raezler | December 8, 2009 12:00 AM EST
Coverage of Woods scandal focused largely on the impact to his endorsements and image.

‘Family Ties’ Mom: Coming Out is a ‘Political Act’

By Colleen Raezler | December 2, 2009 3:36 PM EST
Meredith Baxter, known for her role as the liberal matriarch Elyse Keaton in "Family Ties," came out as a lesbian this morning on NBC's "Today."

Baxter told host Matt Lauer that she's a "very private person" and "not a very political person," but that she understands coming out "is a political act."

"My understanding is that so much research has been done that says that if anybody knows someone who is gay or lesbian, then when they are addressing gay or lesbian issues, political issues that affect their rights, they're less likely to vote against them, to take away their rights," Baxter explained.

"If you knew me before, and you cared about me before, I'm the same woman," Baxter continued. "I'm the same mother to all these children. And if I can be that lesbian you now know, okay, well if I vote this way, than, than that actually might affect this person I know, that Meredith."

'Family Ties' Mom: Coming Out is a 'Political Act'

By Colleen Raezler | December 2, 2009 12:00 AM EST
Actress Meredith Baxter revealed her sexual orientation on the Today show, despite claiming to be a 'very private person.'

According to the panel Behar spoke with, the holidays are a great time for gay people to come out of the closet. They are also a good time to knock religion and push the gay agenda.

Actor Jeffrey Self, one of the three gay panelists, told Behar "I think also [coming out] is a nice distraction from all the other drama that's taking place in your house. Everybody's already mad at each other."

"I think it's the perfect time to do it," claimed comedienne and lesbian Judy Gold. "Because then you get it over with and everyone is already there. So they don't have to call each other and say, did you hear?"

Behar and her pals also managed to mock Christianity, insult the Catholic League's Bill Donohue, play the break-up of a marriage because of homosexuality for laughs, and proclaimed Adam Lambert a "genius" for his sexually explicit American Music Awards performance and denounced ABC as "cowardly" for pulling the plug on Lambert's live "Good Morning America" appearance. Behar further claimed her "philosophy" was "that a parent should say to the child, ‘are you gay' when they see them playing with dolls when they're boys."

By Colleen Raezler | November 25, 2009 12:00 AM EST
CNN show hosts panel that claims the holidays are a great time for homosexuals to come out of the closet.

According to the panel Behar spoke with the holidays are a great time for gay people to come out of the closet. They are also a good time to knock religion and push the gay agenda.