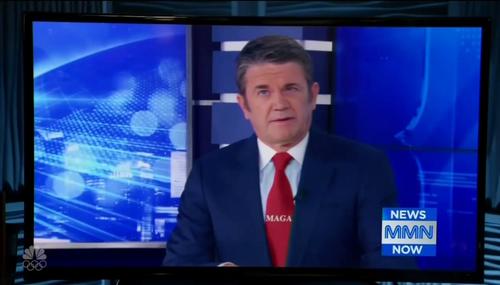 Culture
Amelia Hamilton
January 4th, 2018 11:31 PM
NBC's newsroom comedy Great News let the cat out of the bag on the sorry state of modern journalism: If you want to make it in the news biz, you can't be impartial, you have to pick a side and create drama.

Mark Finkelstein
July 28th, 2007 7:18 PM
Jim Pinkerton found a graphic way to express his displeasure over Fox News Watch's decision to devote a segment to Lindsay Lohan's latest run-in with the law. With a nod to MSNBC newsreader Mika Brzezinski, who as I chronicled here had torn up a Paris Hilton story in protest, Pinkerton ripped a page or two on tonight's show.FOX NEWS WATCH PANELIST JIM PINKERTON: This speaks to formula, right…