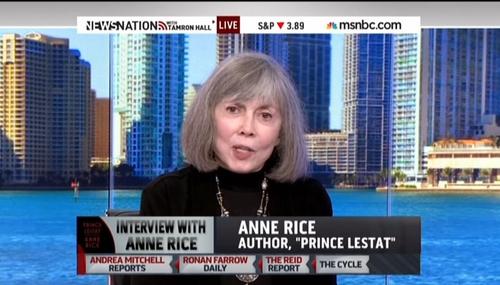 Business
Sam Dorman
December 23rd, 2016 9:51 AM
Like stories of vampires, climate change is nothing new. ​Interview with the Vampire author Anne Rice suggested as much in a Dec. 22, interview with the Daily Beast. While answering questions about her book Prince Lestat and the Realms of Atlantis, Rice cited a history of catastrophes on earth and their impact on the climate.

Scott Whitlock
March 6th, 2008 4:18 PM
"Good Morning America" correspondent Chris Connelly talked with horror novelist, turned religious fiction writer, Anne Rice on Thursday about how friends reacted to her becoming a "Jesus freak." Though the interview was a friendly one, Connelly did ask, in a jovial tone, what it was like when friends said, "'Oh, my gosh. She's out of her mind. Oh, no. Look, she's become a…