The rampant crony capitalism of the federal government simply can't be ignored anymore, but the media has made a habit out of selectively picking and choosing what it wants to report on with this administration. This latest example may ultimately be ignored and denied too however, because it involves the brother of our current vice president.

According to Charlie Gasparino of Fox Business, a subsidiary of the construction company called Hill International was handpicked last year to oversee the building of at least 100,000 affordable homes in decimated areas of Iraq. When asked why his company was chosen over all the others, company president David Richter didn't beat around the bush. "It really helps to have the brother of the vice president as a partner," he said.

With gratitude to Providence and thanks to all who kept me in their thoughts and prayers, I'm happy to be home from Iraq. I arrived in Ithaca last night at about 9 PM, about 43 hours after beginning the journey home from Baghdad. Naturally there were a few more plot twists along the way. 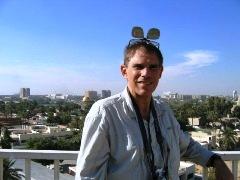 It's 5 AM in Qatar, where we landed an hour or so ago. Yes, the Iraq portion of this trip is over. Not without a few final twists and turns, naturally. We got into the Green Zone Monday night and camped out in a media lounge.

When last we spoke, I had completed a work-out at the Camp Al Asad gym - just like home but for the presence of weightlifters bearing M-16s.  The plan had been to spend the rest of the day working out of the Public Affairs Office at Al-Asad, but to be on the safe side it was decided to go right out to the air terminal.  We were flying Space 'A,' the military equivalent of stand

From Seabees to Convoy Security to Some Time With the Angels 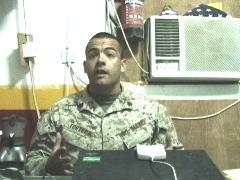 We’re at Camp Al Asad, about 150 miles west of Baghdad in Anbar Province. We began our day with the famous Navy Seabees, the construction battalions that historically have gone ashore with the Marines to build what needs to be built. We spoke with Seabees largely from a reserve unit from Washington State. Most of 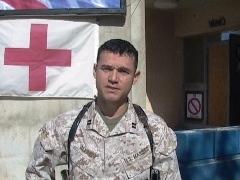 On our way from Habbaniyah to Camp Al-Asad, further west in Al Anbar province, we found ourselves out on the tarmac at Camp TQ awaiting our helo.

Iraq Diary: Training to Board Craft on the Euphrates [With Video]

We were down on the Euphrates this morning with Navy LT Torres and eleven Iraqi soldiers that he is training. On today's menu: learning to board crafts encountered while on patrol on the the river. The rule is to board every craft, again and again, as encountered. Yesterday's friendly fisherman could be today's insurgent, or someone who is perhaps being coerced by others on board.

Iraq Diary: On the Euphrates at Habbaniyah

After last night's slight detour, we headed out toward Habbaniyah today, but not before we were given a windshield tour of the huge Al Taqaddum Marine base. We were passing by some absolutely desolate, petrified sand dunes when, almost miraculously it seemed, we saw a huge body of water - Habbiniyah Lake, so vast that even from some elevation we couldn't see the other side. Along the way we saw remnants of Saddam's air force that never made it into the air in Desert Storm.

Chat With a Passionate Marine, Detour on Road to Habbaniyah

We helo'ed out of Fallujah last night but not before having the chance to spend time with the CO, Colonel Bristol. A Marine's Marine, he was the man who created the martial arts program that we had witnessed yesterday. He has a quiet-but-powerful force field around him, a passionate belief in the Marines, their mission and our ability to win and to train Iraqis to stand up for themselves - given the time.

Iraq Diary: On to Fallujah

Reading yesterday's entry I realize I never did get around to describing my meeting with Dr. Ali Aldabbagh, chief spokesman to Iraqi PM Maliki. Dr. Aldabbagh told me that a precipitous US withdrawal would be a "huge gift" to the terrorists. He also described Muktada Al-Sadr as a man of "restraint" and said that, like it or not, he is a "player." Events of today have perhaps put those statements in an interesting light.

What a day. We learned that the IED we heard yesterday killed 35 police recruits. As fate would have it, this morning I interviewed Maj. Gen. Kenneth Hunzeker, who heads the Civilian Police Assistance Training Team. You should find a full report on our conversation over on CNSNews in the next day or so, but I will pass along the fact that Iraqis show a tremendous determination to serve in the police despite the violence.