R. Emmett Tyrrell Jr.
May 24th, 2018 10:00 PM
Castelvetro di Modena, Italy — On May 14, a star failed to come out. Tom Wolfe passed away that day. With his passing, the conservative movement lost its greatest social critic and America lost one of its greatest novelists. As a writer, Tom was his own man. He died as he lived: on his terms, or at least as much on his terms as a man can. 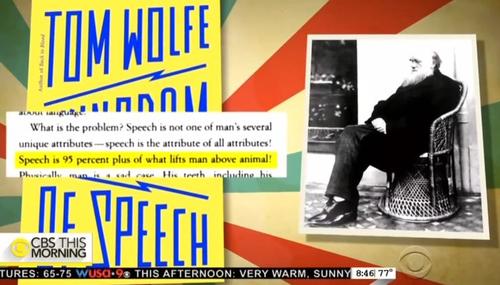 Scott Whitlock
August 30th, 2016 4:20 PM
CBS This Morning journalist Jeff Glor on Tuesday derided famous author Tom Wolfe for the “very dangerous” ideas in his new book. The writer attacks Darwinism and far-left professor Noam Chomsky in his new work, The Kingdom of Speech. It was clear that the network journalist was enamored with the articulate Wolfe, complimenting the “wry, wicked” intellectual.

Noel Sheppard
June 18th, 2008 11:24 AM
Best-selling author Tom Wolfe made some statements about American journalism last week that would raise a lot of eyebrows in newsrooms around the country if anyone cared to notice.For instance, he believes "newspapers are declining rapidly," that when a television news outlet does "a big story it`s always wrong," and that Dan Rather and his "60 Minutes" crew were "idiots" for airing the totally…