During Thursday’s edition of Morning Joe, the panel lost their collective mind over Vice President Mike Pence telling NBC’s Andrea Mitchell that he would “respectfully encourage the Special Counsel and his team to bring their work to completion.” Co-host Joe Scarborough went so far as to compare the Vice President, whom he had previously referred to as a “Hapless Indiana Hoosier,” to Richard Nixon’s first Vice President Spiro Agnew, who had to resign because of corruption charges. Yesterday marked the 40th anniversary of a unique political speech. On November 13, 1969, Vice President Spiro Agnew questioned the network news divisions' domination of the political debate, and the "narrow and distorted picture of America [that] often emerges from the television news." 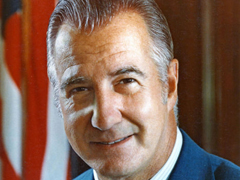 Is Barack Obama turning into Spiro Agnew? The White House's attacks on the Fox News smack of the distaste for media opposition espoused by Nixon's vice president almost 40 years ago but are being met with a decidedly different reaction today by the elite media.

Pundits have wondered aloud since last week why the White House would pursue a strategy that seems to be boosting the ratings of a purported 'opposition' news network. MSNBC's Joe Scarborough posited today that the White House's attacks on Fox News are designed to prevent the mainstream media from picking up on stories damaging to the administration (video embedded below the fold, h/t to NB reader Kirk W.).

Every time Fox breaks a story on the radical connections of a White House advisor or appointee, the news is potentially damaging to the administration. But damage is only really done if the rest of the media picks up on the story, reports it, and turns it into a national news sensation, a la Van Jones.

How interesting that ABC's Charles Gibson, as noted in this Associated Press dispatch, focused on Sarah Palin's foreign-policy bona fides when he interviewed her (a transcript is here). Also note the biased AP evaluation (bolds are mine):

..... She also said she had never met a head of state and added: "If you go back in history and if you ask that question of many vice presidents, they may have the same answer that I just gave you."

Indeed. Palin's contention gains more support if you look at the prior experience of at least a couple of presidents and vice-presidents during the past few decades:

In one of what will surely be a long and tiring string of stories speculating about running mates, CBS’s The Early Show discussed which running mates helped or hurt their parties on Thursday.