In a 15-paragraph story filed yesterday afternoon, Baltimore Sun's Justin Fenton reported how a police cruiser was dispatched at all times during the recent snowstorms to watch over the house of the city's disgraced ex-Mayor Sheila Dixon (D).

You'll recall Dixon was convicted of misappropriating donated gift cards intended for distribution to needy constituents. Instead, Dixon used them on her own personal shopping spree.

Pursuant to a plea deal on another criminal charge, Dixon resigned from her mayoral post on February 4.

Fenton did an excellent job reporting the story and noting the controversy engendered by the city devoting resources for a felonious ex-politician. Yet nowhere in his story did he note that Dixon is a Democrat. 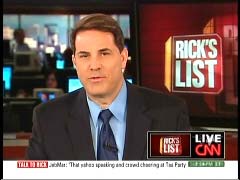 CNN’s Rick Sanchez failed to mention the party affiliation of former Baltimore Mayor Sheila Dixon on Friday’s Rick’s List program, but made every effort to identify former Congressman Tom Tancredo as a Republican. Sanchez ranked Tancredo higher on his “List You Don’t Want to Be On” for his remarks at the Tea Party Convention, despite Dixon’s conviction for illegally using donated gift cards for the needy.

The CNN anchor gave the number three and number two spots on his “List You Don’t Want to Be On” just before the top of the 4 pm Eastern hour. Sanchez chose Dixon as his number three, and gave a brief on her resignation from office and how she received two years probation for her crime. He didn’t mention her Democratic Party affiliation during his brief, nor was it mentioned in the accompanying on-screen graphic.

Despite being convicted of stealing gift cards intended for poor Baltimore residents and using them for her own personal shopping spree, outgoing Baltimore Mayor Sheila Dixon (D) will still be able to collect a mayoral pension after she resigns from office early next month.

Dixon pleaded guilty last week to one count of perjury for failing to disclose on city ethics forms the gifts she received from a developer. As part of a plea deal, she will keep her $83,000 pension. She will receive probation before judgment for the perjury count and the embezzlement conviction. She also must donate $45,000 to charity and is banned from seeking city funds to pay her legal bills or working for the city or state during her probationary period.

This development, understandably, has quite a few Baltimoreans outraged, so Sun editors gave Scharper 25 paragraphs to report on incoming interim mayor Stephanie Rawlings-Blake's pledge to look into the pension system and sew up loopholes that allow for convicts like Dixon to benefit from taxpayers in their retirement from public service.

Yet nowhere in Scharper's January 12 article was Dixon's Democratic Party affiliation mentioned, nor the fact that Council President Rawlings-Blake and the rest of the city council are likewise all Democrats.

While the Democratic Mayor of Baltimore, Shelia Dixon, resigned on Wednesday amid a criminal scandal, the evening news programs on NBC, ABC, and CBS all failed to mention the political downfall.

On Thursday, all three network morning shows offered news briefs on the resignation, however, all forgot to note that Dixon was a Democrat.

On NBC’s Today, co-host Ann Curry mentioned: “Baltimore Mayor Sheila Dixon announced her resignation on Wednesday after she was convicted of embezzlement.  She also agreed to plead guilty to perjury in a deal reached with prosecutors.”

Nowhere in their 9-paragraph breaking news article filed at 3:44 p.m. EST today did Baltimore Sun reporters Liz F. Kay and Liz Bowie note Dixon is a Democrat, even though her party has a monopoly on the city's elected officials and has for decades.

Dixon, you may recall, was convicted in December for misappopriating gift cards donated to her office and intended for distribution to needy Baltimore residents. Instead, Dixon used some of the cards for a personal shopping spree. In effect, she was convicted of robbing from the poor to benefit herself. 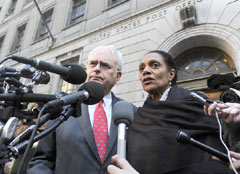 Imagine if you will that former Alaska governor Sarah Palin was accused of taking gift cards donated to her office for redistribution to needy constituents and using them instead for a personal spending spree.

The media firestorm would swirl uncontrollably, of course, and certainly you couldn't fault the media for reporting on the ensuing criminal trial.

Well, this sort of this has happened, only to the Democratic mayor of Baltimore Sheila Dixon who was convicted yesterday on a misdemeanor charge of embezzling, yet the coverage from the broadcast networks has been non-existent until the trial's conclusion.

A search of "Sheila Dixon" among ABC, CBS, and NBC news transcripts catalogued on Nexis from January 1, 2007 to December 2, 2009 yielded only three hits. None of the stories were about Dixon's trial, and one, an April 30, 2008 "Nightline" story on predatory mortgage lending, cast Dixon in a favorable light as a champion of citizens who have been exploited by mortgage lenders.

Twelve days ago I noted how the Baltimore Sun failed to mention indicted Mayor Sheila Dixon's Democratic Party affiliation in a story about an embezzlement trial. The mayor stands accused of misappropriating gift cards intended for poor Baltimoreans. Instead of making sure the donated retail gift cards got into the hands of needy folks, Dixon is alleged to have used them for her own personal shopping spree.

Today, with the Dixon jury literally still out, the Sun's Annie Linskey and Julie Bykowicz did mention Dixon's Democratic Party affiliation, albeit in the very last sentence of their November 23 14-paragraph story published in the Metro section of the Washington Post*:

Name That Party: Baltimore Mayor Accused of Using Gift Cards Designated for Poor for Herself

It's time once again for our favorite media parlor game, "Name That Party!"

The Washington Post, syndicating the story, also failed to note Dixon's affiliation in their caption to an Associated Press photo of the mayor which reads, "Baltimore Mayor Sheila Dixon is accused of buying personal items using gift cards donated to her office."

The unsigned story by the Sun notes that Dixon is alleged to have practically stolen from her city's poorest residents for her own personal gain:

By Ken Shepherd | August 3, 2009 3:47 PM EDT
New indictments on theft and perjury charges handed down against Democratic Mayor Sheila Dixon are a “blow to Baltimore’s pride” leading “political watchers” to huff in disgust that it’s time to “get this over with,” reports Annie Linskey this morning at BaltimoreSun.com.

Of course almost all of the political watchers quoted in the story – the exception being University of Virginia’s Larry J. Sabato –  are, like Dixon, Democratic officeholders:

The new indictments issued last week in the City Hall corruption probe has many of Baltimore's political leaders impatient for resolution to a case that has spanned three years and left the city's reputation in limbo.

"Most people I talk to are saying 'Let's just get this over with,' " said Baltimore Del. Curtis S. Anderson, a Democrat. "Let's get to trial and see what really happened." 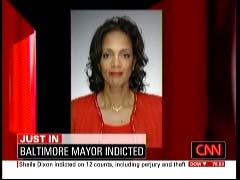 During a breaking news brief on Friday’s Newsroom program, CNN anchor Kyra Phillips failed to identify the party affiliation of Baltimore Mayor Sheila Dixon, a Democrat, who earlier in the day had been indicted on 12 counts related to a corruption probe by Maryland state officials. She did identify Dixon as “the first woman to serve as the city’s mayor” and “the first African-American female to serve as that city’s mayor.”

Phillips began the brief with a lament over corruption in politics in general: “Oh, as if we don’t have enough public corruption within our politics to report, we’ve got another piece of news that [is] just developing right now.” She then reported that the Baltimore mayor had been “indicted on public corruption...12 counts, I’m told -- perjury, theft, misconduct in office.” After describing some of the circumstances into the multi-year investigation, she continued her lament by focusing on the prestige of Dixon: “It’s a shame -- Mrs. Dixon was the first woman to serve as the city’s mayor -- also the -- you know, the first African-American female to serve as that city’s mayor.” The mayor’s Democratic affiliation was neither mentioned by Phillips during her brief, nor by CNN’s on-screen graphics.

If ever there was a new year's resolution the mainstream media could take up, it would be to note the party affiliation of indicted politicians regardless of their political party and especially when noting indictments in urban areas where one party holds a monopoly on city government.

Take for example a January 8 Baltimore Sun article running on page B4 of the same day's Washington Post*, that informed readers that Baltimore City Council member Helen Holton was indicted the day before "on bribery charges related to tax breaks for a high-end building under construction on the [Baltimore] city waterfront." Also indicted in the same investigation was Ronald H. Lipscomb, a real estate developer "with close ties to Mayor Sheila Dixon."

In Case You Were Wondering...