In a bravura display of rhetorical contortion, Rachel Maddow spent 10 minutes last night talking about net metering without actually uttering the words themselves -- all the better to prevent her gullible viewers from taking a closer look at this problematic policy.

As mandated in 43 states and the District of Columbia, net metering allows small-scale generators of electricity, such as those with solar panels on their roofs, to sell excess electricity back to power companies. Utilities don't like it because most states require power companies to buy this electricity at retail prices, rather than the far lower wholesale cost. (Video after the jump)

Olbermann Distorts Conservative Adage as a 'Screw the Poor' Attack 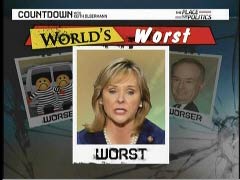 On Friday’s Countdown show, MSNBC host Keith Olbermann either showed his ignorance of conservative ideology, or he made his latest deliberate distortion to attack conservatives as he suggested that a Republican candidate for Oklahoma governor expressed a negative attitude toward the poor, referred to by Olbermann as "screw the poor," when, in reality, she was making the case that the wealthy are important to the economy because they are the wage payers for many people.

As she spoke out against raising taxes, Rep. Mary Fallin alluded to the conservative argument that a tax increase on the wealthy would be bad for  employees who have wealthy employers. Olbermann quoted her version of the common conservative saying that conveys this point. Fallin: "I don't know about you, but I've never been offered a job by a poor person."

The MSNBC host, apparently not getting the point, concluded that her words were meant as an attack on the poor as being useless to her, and tagged her with the top dishonor of "Worst Person in the World." Olbermann:

At a recent tub thumping for the conservative cause, she insisted government spending needs to be cut and tax breaks be given to the wealthy. And then she added this: "I don't know about you, but I've never been offered a job by a poor person." She did not add, "So screw’em." That was merely implied.

Below is a transcript of the relevant portion of the Friday, August 27, Countdown show on MSNBC: