The NewsBusters Weekly Recap: September 8 to 14

In an interview with Playboy magazine, MSNBC host Keith Olbermann actually fulminated that "Fox News is worse than Al Qaeda." He then went on to compare his cable rival to the Ku Klux Klan and rail against Rudy Giuliani. And this is the guy who is hosting football coverage on NBC? Live?

Live From the Bathroom

Speaking of Fox News, the network proved this week that it’s not always "fair and balanced." FNC reporter Laurie Dhue anchored a segment entitled "Lavatory Lust" that re-enacted the infamous Larry Craig bathroom incident. Before ending the "Geraldo at Large" piece, Dhue editorialized that it was sad Craig "had to go to a public place, and that’s the shame of homosexuality in this country right, today — at least the shame that the Republican Party puts on it."

By Richard Newcomb | September 13, 2007 12:07 PM EDT
Marshall University psychology professor W. Joseph Wyatt should probably stick to psychology as oposed to attempting media analysis. However, he has decided to write an op-ed in the Huntington, West Viriginia Herald Dispatch claiming that media bias is a myth.

FNC's Dhue Charges Any 'Shame' of Homosexuality a GOP Creation 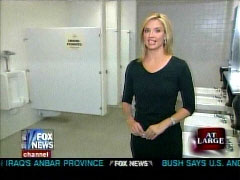 Touting it as a “Geraldo at Large investigation you won’t soon forget,” FNC’s Laurie Dhue filed a report from inside a men’s bathroom on what supposedly happened last June between Senator Larry Craig and an undercover police officer, with actors in separate stalls rubbing their feet together.

I wonder, especially, when it involves sexual torture of infants and toddlers....why isn't this getting any coverage?

Many of us here, of course, take it for granted that the news media focuses far more on any scandals or troubles that occur with Republicans while at the same time they try their level best to ignore those that are perpetrated by Democrats. Sometimes that claim is open to interpretation, sometimes it seems too obvious to doubt, but that the media favors the Dems seems beyond doubt. The MRC recently had a much talked about media bias report that went a long way toward proving with statistics that our contention is true (Rise and Shine on Democrats), at least as far as morning TV shows go.

But, it's always helpful to get as many statistics as possible to buttress our case. I have here another small indication of how the GOP is treated unequally with the Democrat Party revealing Media Bias in the form of a Nexis* search of two ongoing, but not equally treated, scandals in the news. Our search parameters covered the last 90 days from September 6th back.

Larry King to Bill Clinton: ‘You Almost Got Him’ [Bin Laden] 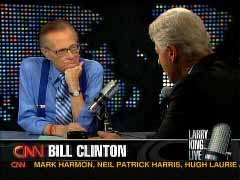 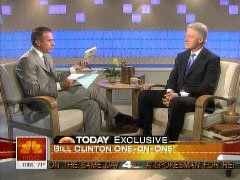 NBC's "Today" show devoted its entire 7:30am half-hour of its Wednesday morning program to Bill and Hillary Clinton as it invited on the former president to tout his wife's candidacy and his new book.

Whether senator Larry Craig (R-Idaho) was outed for political purposes remains a subject of pure speculation one thing, however, is clear: There is a very dedicated group of left-wing gay activists out there who have made it their goal to drag gay Republicans' sex lives out into the public eye unless they toe the line politically.

Actor and commentator Ben Stein strongly defended Larry Craig on Friday's "Your World with Neil Cavuto," arguing that the police officer who arrested the Idaho Republican senator used "Gestapo tactics" to "browbeat" him into pleading guilty when, in fact, Craig had not committed any illegal act.

"He didn't do anything. He tapped his foot," Stein said. "And I don't like the idea that people are sitting in the next stall from you at a public bathroom listening to whether or not you tap your foot. This is, as I said, Gestapo tactics, Gestapo, Gestapo, Gestapo. It's not America."

Just last fall, as the networks exploded with coverage of Mark Foley's creepy instant messaging, we noted the networks (like ABC) had a very different way of covering Republican sex scandals -- especially the gay-themed ones -- than they did for Democrats. The best example is Barney Frank.

If you needed any more evidence as to how little actor Alec Baldwin actually knows about politics, it was provided Saturday evening in the second sentence of his article at the Huffington Post (emphasis added):

"Even though [then Rep. Larry] Craig voted to censor Barney Frank for Frank's tryst with a male prostitute."

To begin with, Alec, the term is censure.

Adding insult to injury, a vote on censuring Frank never happened, for as reported by the New York Times on July 20, 1990 (emphasis added):

In light of the Larry Craig scandal, Time magazine's Joe Klein stepped up to the pulpit at the magazine's "Swampland" blog to insist that conservative Christians are being, well, un-Christlike with their moral opposition to homosexuality. Klein points to conservative objection to homosexuality for creating a culture of shame that forces gay men to seek sex in public restrooms.