On Monday’s The Situation Room, CNN anchor Wolf Blitzer interrupted a back-and-forth discussion on the presidential campaign between Democratic strategist Donna Brazile and CNS News editor-in-chief Terry Jeffrey for a live video feed of rock musician Bruce Springsteen at a Barack Obama campaign rally in Michigan: "I want both of you to stand by because Bruce Springsteen is singing right now at a Barack Obama rally in Michigan, and I can't help but want to listen a little bit. Listen to ‘The Boss.’" Just before this mid-conversation interruption, Jeffrey made a point about how "there's a lot of people in this country who believe the media wants Obama to be elected president, and part of doing that is tearing down Sarah Palin." It’s kind of funny that Blitzer helped Jeffrey prove the first part of his point only seconds after he made it [see video at right].

Earlier in the discussion, at about 50 minutes into the 4 pm Eastern hour of the CNN program, Blitzer brought up new CNN poll numbers that indicated that the number of people who think Sarah Palin is qualified to be president has dropped since early September 2008. He asked Jeffrey, "Why has it gone down?" Jeffrey then made his first point about the media bias: "I think since Sarah Palin has been nominated, she's taken quite a beating from the liberal press." He then described how he thought those poll numbers didn’t matter, and that "quite frankly, I think if she was at the top of the ticket, they would be doing better."

Donna Brazile: No Need for Nominees to Show Leadership on Bailout Bill

By P.J. Gladnick | September 25, 2008 7:58 AM EDT
It looks like the Democrats are shocked by a nominee who actually takes the initiative to show some leadership in the economic bailout bill as evidenced by the reaction of Democrat activist and CNN political c

No, it’s not what you might think. We know that CNN’s Roland Martin "dances" to a liberal tune, but the cameras caught him grooving to the music at the Democratic convention, along with CNN frequent contributors (and Democratic strategists) Paul Begala and Donna Brazille, as featured in a report by correspondent Jeanne Moos on Tuesday’s The Situation Room (video at right).

The CNN camera crews caught these lighter moments involving the trio. Martin sang along to the house band’s rendition of Earth, Wind, and Fire’s hit "September," while Begala and Brazile coupled-up and danced together to a slower tune. Not to be upstaged apparently, Martin stopped a passer-by and danced with her. I guess we shouldn’t be surprised that they like to let loose when they’re not attacking conservatives and Republicans.

ABC's George Stephanopoulos clearly had John McCain's houses on his mind Sunday, for during the latest installment of "This Week," the presumptive Republican presidential nominee's real estate holdings were discussed with every guest.

What Stephanopoulos may not have expected was Time's Mark Halperin claiming that "this is going to end up being one of the worst moments in the entire campaign for one of the candidates, but it's Barack Obama."

Adding delicious insult to injury, much to Democrat strategist Donna Brazile's dismay, Halperin saw the Obama campaign's attack on McCain not knowing how many houses he owns as opening the door for the Arizona senator to bring up the Illinois senator's connections to Tony Rezko, Reverend Wright, and William Ayers (video embedded right, partial transcript follows):

Who cares if Barack Obama won't protect a child who is born alive after an abortion?  Gas is over $4/gallon!

So argued Donna Brazile when Bill Bennett pressed her on the matter today.  The issue arose during a post-Obama press conference kibitzing session on CNN's Situation Room.  Bennett was making the point that the complaisant media in attendance had failed to press the candidate on tough issues.

Monday’s "The Situation Roon" followed-up on Kelli Arena and Wolf Blitzer’s biased reporting on the Supreme Court upholding Indiana’s voter ID law with two segments featuring five talking heads -- four liberals to one conservative. In the first segment, Donna Brazile, who appeared in Arena’s report via sound bite and continued her "voter suppression" argument, faced-off against Republican strategist John Feehery, who effectively countered the liberal argument by bringing up the fact that he had to show ID in order to enter the CNN studio. In the second segment, Jeffrey Toobin, Jack Cafferty, and Gloria Borger picked up on Brazile’s suppression argument and portrayed the Court’s decision as possibly "something sinister" and a "partisan enterprise."

Will Against The Liberal World on 'This Week'

Have a look at the screencap from today's This Week, then please answer this serious question: has ABC no shame? How does the network justify a round-table consisting of four liberals against one conservative?

Wednesday’s "The Situation Room" brought on three Democratic operatives to denounce "controversial" remarks made by Rush Limbaugh on his radio show earlier in the day, with only one conservative/Republican, CNSNews.com’s Editor-in-Chief Terry Jeffrey, on to defend the top-rated radio talk show host. Limbaugh’s apparent offense was when he brushed aside talk of a possible joint ticket between Hillary Clinton and Barack Obama. "Let’s say put Hillary on top, that’s a position she is familiar with. Therefore you’ve got a woman and a black, first time ever on the Democrat ticket. They don’t have a prayer."

Democratic strategist Donna Brazile blasted Limbaugh during a segment about 50 minutes into the 4 pm Eastern hour of the program. "I think that comment is, as far as I can tell, a very un-American conversation.... [A]nd to suggest somehow or another that we are not capable of serving this country in the capacity of Commander-in-Chief is just, in my mind, mind-boggling."

Lauer to Bill's Defense: 'Nothing to Do With Race'

To know what's on a morning-show anchor's mind, it's often easy to read between the lines. Katie Couric famously employed the "some say" technique to put her own views in the mouths of unidentified others.

But it's relatively uncommon to hear an anchor flatly express an opinion in the way Matt Lauer did this morning. The topic was whether there were racial overtones to Bill Clinton's "fairy tale" tirade directed at Barack Obama in the closing days of the New Hampshire campaign. Matt's guests were radio talk show host Michael Smerconish and former Clinton advisor Paul Begala. 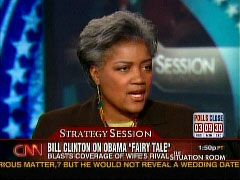 On Tuesday's The Situation Room, CNN's liberal political analyst Donna Brazile, formerly an advisor to both Bill Clinton and Al Gore, hinted that she was racially offended by some of the former President's recent attacks on Barack Obama.

Worst job in America this morning: Clinton campaign staffer assigned to inform Hillary of her treatment at the hands of ABC's "This Week" panel.

From moderator George Stephanopoulos to former Gore campaign manager Donna Brazile, to the husband-wife tandem of Jay Carney of Time and Claire Shipman of ABC, to conservative sage George Will, it was a decidedly downbeat take on Hillary's fortunes.