On Friday's Situation Room, The Daily Beast's Howard Kurtz stated that the fundraising activities of Fox News contributors Dick Morris and Karl Rove somehow rose to a worse level than Keith Olbermann's maximum individual donations to three Democrats, which violated MSNBC's policy. Kurtz also suggested that both networks "tighten up on this stuff or just tear up the rule book."

Correspondent Mary Snow covered Olbermann's suspension during a report just before the bottom of the 6 pm Eastern hour. Snow began by noting how the anchor "has become a star power at MSNBC for voicing his liberal opinions, but Keith Olbermann is now sidelined for financially supporting three Democratic candidates. Records show he contributed $2,400 each to Kentucky Senate candidate Jack Conway, and two members of Congress from Arizona: Gabrielle Giffords and Raul Grijalva." She continued that "Congressman Grijalva was a guest on Olbermann's show October 28, the same day Olbermann donated to his campaign."

Later, after recounting how the MSNBC personality has been "a vocal critic of Fox and its parent company, News Corp, for donating $1 million to the Republican Governors Association," the CNN correspondent played her clip from Kurtz, who gave his take on the Olbermann suspension and on the Fox News contributors' fundraising:

... Gee, you'd think they would, seeing how Schultz broadcasts both his radio and cable shows from MSNBC studios in New York City. No such luck.

SCHULTZ: When I was sitting home for a number of years watching Olbermann tell me how bad Fox was, I, OK, I believe it, but now I know it! And I want you to know it! That we don't go on TV and lie! But this is the game that they play across the street. 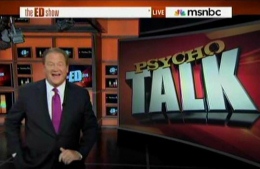 Liberals like to style themselves as being above ageism, lookism, sexism and judgementalism when it comes to sexual predilections.  But in one fell show, Ed Schultz managed to indulge in all of the above.

On his MSNBC show this evening, Schultz mocked:

Video after the break. 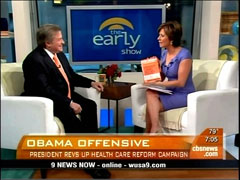 On Friday’s CBS Early Show, co-host Maggie Rodriguez interviewed commentator Dick Morris about his latest book critical of the Obama administration, Catastrophe. After reading the book’s full title, Rodriguez observed: "This title, though, Mr. Morris, can’t you see a lot of people dismissing it right off the bat as alarmist? It screams at you."

In response, Morris pointed out the dire state of the economy: "9.5% unemployment, four quarters of negative growth, our car companies in receivership, our health care program about to be taken over, and banks being nationalized, and I’m alarmist?"

Rodriguez replied by citing recent media spin that the recession is over: "Well what about the positive indicators? Because not so long ago, it was on the cover of every magazine, the topic of every cable show and Sunday morning show, that we were kind of digging out of the recession. We saw three straight months of rising home sales, the stock market up more than 40% since March. Ford beat expectations. Doesn’t that count?" 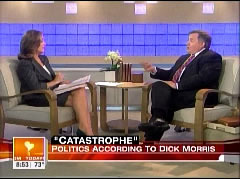 NBC's Meredith Vieira on Thursday conducted a defensive interview with Fox News contributor Dick Morris, at one point skeptically wondering if "the Republican tactic from this point on" would be "to sit and watch Obama fail." Later, when Morris pointed out the problems with the Canadian health care system, the Today host retorted, "But, the President clearly has said that's not the road he's headed down."

On one level, NBC should be commended for actually featuring Morris to talk about "Catastrophe," his new anti-Obama book. But, the interview didn't air until 8:51am, long after many Americans had left for work. Co-host Matt Lauer dominated most of the program's first two hours, reporting live from the late Michael Jackson's Neverland ranch.

This led Morris to make a dig at the show's excessive coverage. Speaking of Canada's government-run health care, he quipped, "So in Canada, there's a 16 percent higher death rate from cancer than in the United States. And that's not Neverland, that's U.S."

Stephanopoulos Doesn't Ask Hillary If Obama Has Marginalized Her

When it was announced that Hillary Clinton was going to give her first Sunday interview since becoming Barack Obama's Secretary of State to her husband's former advisor George Stephanopoulos, nobody envisioned a hard-hitting exchange.

However, as he tossed the softest of softballs at his guest, the "This Week" host mysteriously avoided asking any questions about Clinton's future political ambitions or the possibility that Obama, by involving Hillary and Bill in his administration, has effectively marginalized them.

It is one thing - as Rush Limbaugh has been vilified for - to say you have a desire for the president to fail, but what about accusing the president of wanting his own policies to fail?

That's what Fox News Channel's Dick Morris said on the March 25 broadcast of "Your World with Neil Cavuto." According to Morris, those who are criticizing Obama for his spending, including Daniel Hannan, who represents South East England for the Conservative Party, made famous by a YouTube video eviscerating Keynesian politics, are missing the point. Obama wants to worsen the economic conditions to expand the powers of government according to Morris.

"We are confusing in analyzing the bank bailout and in what Hannan, the other guest you had on - the British Parliamentarian, had on, was also confusing - means with ends," Morris said. "He said, for example that more spending won't solve the recession. Obama doesn't want it to. He wants the recession to permit him to do more spending, and in terms of this bank package, he knows that the public-private partnership isn't going to work. He's doing his best to kill it by all these comments."

WLS AM 890 in Chicago hosted an in studio visit from ABC newser George Stephanopoulos this morning in the 8:30 segment. Host Don Wade played an interesting Dick Morris sound clip for Stephanopoulos and then asked for his response. That is when Stephanopoulos came right out and said "Dick is a liar." There was no equivocation, no weasel words, just a straight out "liar."

The discussion was focusing on Obama's request to Representative Rahm Emanuel (D-Illinois), a former Bill Clinton senior advisor, to become the new Obama chief of staff. Host Wade was questioning Stephanopoulos as to how the candidate of "change" could go back in time to an old Clinton hack and asked if Emanuel was a good choice for the position.

By P.J. Gladnick | October 3, 2008 9:27 AM EDT
Your humble correspondent, as diligent as ever, carefully checked out much of the post-debate analysis and spin last evening.

On Tuesday’s "Today" show NBC's Matt Lauer confronted Dick Morris about anti-Obama rhetoric in his new book, as the "Today" co-host seemed disturbed by the political consultant's use of terms like "dangerously radical," to describe the Democratic presidential nominee.

Lauer asked Morris if he was "fearmongering," and probed "Are you trying to scare people here?" Lauer then sucked up to the Obama campaign as he pondered that a lot of the "enthusiasm" for Obama is because "he's telling people he's gonna move away from exactly that kind of politics."

The following is the full interview as it occurred on the June 24, "Today" show:

MATT LAUER: Dick Morris is a veteran political warrior. The former Clinton aide turned Clinton nemesis, is out with a new book with the longest title we have ever seen. It's called, Fleeced: How Barack Obama, Media Mockery of Terrorist Threats, Liberals Who Want to Kill Talk Radio, The Do-Nothing Congress, Companies That Help Iran, And Washington Lobbyists For Foreign Governments Are Scamming Us...And What To Do About It. Phew! Dick Morris, good morning. That's a mouthful.

Have the recent race baiting antics of the Clintons left you wondering whether the former first couple has lost its collective mind, especially now that this tactic seems to be at least partially responsible for Barack Obama's landslide victory in Saturday's South Carolina primary?

Or, like most conservatives, do you believe that nothing this pair ever does is spontaneous and without advanced political calculus, and that South Carolina went exactly as Bill and Hill planned?

For those undecided, a conversation I had on Friday with a very liberal albeit astute friend of mine might shed some light.

As the subject of the current presidential race surfaced, my friend indicated that he was supporting Hillary. Knowing him to be very concerned about civil rights, I asked why he wasn't backing Obama.

Update: Welfare Rolls Still Plunging After All These Years, and Still Underreported

OVERVIEW: An underappreciated accomplishment of the past six years has been the continued reduction in the number of people on welfare.

The welfare caseload, after declining dramatically in the first four years after Welfare Reform was enacted, might have been expected to level off, or even rise slightly with overall population growth, after the initial impact of the 1996 law wore off.

After all, the reduction in the number of welfare recipients during the 1990s was stunning. From a peak of over 14 million in 1994, and over 12.5 million at the end of 1996 (over 4.5 million families) when the new took effect, the number of those receiving welfare came tumbling down to about 5.5 million by the end of 2000 — a decline of nearly 2 million per year.

I’m not sure that anyone expected the numbers to steadily fall after the first four years of reform, but that is exactly what has happened. Here are the details for families and recipients on welfare as of the end of each calendar year beginning with the turn of the century (000s omitted):