Scarborough: 'I Hope Palin's Proud Of Herself' For Killing GOP Senate Majority

If only Sarah Palin hadn't promoted the likes of Sharron Angle and Christine O'Donnell, Republicans would be on the verge of winning the Senate majority.  That was Joe Scarborough's thesis on Morning Joe today, culminating in Scarborough saying that he hopes Sarah Palin "is proud of herself" for having killed the GOP's chances.

Scarborough sought to inoculate himself against criticism from the right, insisting he would have wanted to see a "mainstream conservative" in the Nevada and Delaware races.  Warned Joe: "right-wing freaks, don't email me going 'you're a RINO.'"  View video after the jump.

Conservative Delaware Senate candidate Christine O’Donnell (R), a popular target of the mainstream media, was questioned on CNN’s “American Morning” for her statements about faith and prayer in her interview with Christian Broadcasting Network White House Correspondent David Brody. The Christian candidate cited prayer as playing a central role in her campaign, and her comments drew raised eyebrows over at CNN.

“For some people, they think this seems so arrogant, to pray to win a senate race, um, but how is it viewed in the evangelical community?” anchor Kiran Chetry asked Brody. Brody quickly responded by saying that O’Donnell isn’t praying for a victory, but rather, “God’s protection, and for, you know, people within her staff and the eyes of the voters to be open, so to speak.” Brody quickly pointed out to Chetry that the power of prayer is a mainstream concept among average Americans and that O’Donnell is being singled out because she is a political candidate.

On Friday morning, after airing a full report on the Democratic strategy of painting Republican candidates as "dangerous" and "extreme," CBS’s The Early Show co-anchor Maggie Rodriguez seemed surprised when Republican guest Eric Cantor disagreed with her view that "there is no question these Tea Party Republicans are outside the Republican mainstream," and her suggestion that next year Republican congressional leaders may be in the "tricky position" of "feeling indebted to these candidates while trying to keep them in line."

And, picking up on Republican accusations of Democrats being extreme, the CBS anchor also wondered, "If these Tea Party-backed candidates win the election, wouldn't we just be going from one extreme to another?"

Meanwhile, over on the Today show, NBC’s David Gregory repeated the theory of some Democrats that Delaware Republican Senate nominee Christine O’Donnell and other Tea Party-backed candidates are hurting Republicans in neighboring Pennsylvania. And, while he at least conceded that the Tea Party is a "legitimate movement," he described Nevada Republican Senate nominee Sharron Angle – in addition to O’Donnell – as "outliers." He did not acknowledge the role the mainstream media may be playing in turning swing voters against Tea Party candidates.

Howard Kurtz should apologize to conservative author S. E. Cupp for how he and his fellow panelists treated her on Sunday's "Reliable Sources."

As Cupp via a satellite feed tried to explain the point Delaware Republican senatorial candidate Christine O'Donnell was making about the First Amendment during last week's debate with Chris Coons, those in the studio could be heard in the background laughing (video follows with transcript and commentary):

Delaware Senate candidate Christine O'Donnell appeared on Thursday's Good Morning America and attacked the media's reaction to her comments about the First Amendment, pointing out that journalists ignored a gaffe by her opponent, Chris Coons. Her complaints apparently got results: The network played the Democrat's blunder.

Asked by reporter Jon Karl about her (correct) assertion that the words "separation of church and state" aren't anywhere in the Constitution, O'Donnell complained that "First, let me point out about that, it's really funny the way that the media reports things." She recounted the debate exchange: "I followed up with, 'Can you name the five freedoms that are guaranteed to us, that are protected by the First Amendment?' And [Coons] could not." [MP3 audio here. For video, click on article.]

ABC then, for the first time, played the clip of Coons being unable to list freedom of religion, speech, the press, the right to assembly and the right to petition the government. On Wednesday, GMA played the clip of O'Donnell's questioning of separation of church and state, but not of Coons' embarrassing moment. CBS's Early Show and NBC's Today have still yet to highlight the moment. 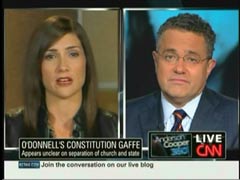 CNN devoted several segments on Tuesday and Wednesday to Delaware Republican Christine O'Donnell's apparent gaffe on the First Amendment, but barely acknowledged her opponent Chris Coons's own gaffe on the amendment. Analyst Jeff Toobin spun O'Donnell's remark as demonstrating that "she didn't seem to know" the amendment. It took conservative Dana Loesch on AC360 to bring up Coons's own gaffe.

What Media Won't Tell You About Separation of Church and State

The media are in a full-scale hyperventilation following Tuesday's separation of church and state comments by Delaware Republican senatorial candidate Christine O'Donnell.

As an Investor's Business Daily editorial points out, O'Donnell was right when questioned about this issue during a debate with Democrat candidate Chris Coons, and all the nattering nabobs of negativism filling the airwaves are wrong:

A month ago, CBS News hired ex-Bill Clinton and Al Gore campaign operative Jamal Simmons, a self-described “strong supporter of Barack Obama's campaign,” as political analyst, and Tuesday night the CBS Evening News paired him with the more sober in-house analyst John Dickerson. As a result, viewers heard a rational look at the political landscape from Dickerson paired with Democratic talking points, in the guise of political analysis, from Simmons, but not balanced by any GOP veteran tearing down Democrats.

Simmons turned polls showing impending big Democratic losses into a way to deliver anti-Republican demagoguery, as he charged “voters are starting to figure out that if Republicans win, they're going to cut, you know, 21 percent out of education and borrow $700 billion from the Chinese to give tax cuts to rich people, and most voters don't want to do that.”

After Katie Couric raised, as controversial, Christine O’Donnell’s accurate contention “separation of church and state” is not in the Constitution, Simmons took the opportunity to deride Republican candidates: “If you look around the country, not just Christine O'Donnell but Sharron Angle out in  Nevada, and Rich Iott in Ohio who dresses as an S.S. Nazi for the weekend, you know, these candidates are making Democrats look pretty good in comparison.”

Appearing as a guest on Tuesday’s Countdown show on MSNBC, the Huffington Post’s Howard Fineman – formerly of Newsweek – joined substitute host Cenk Uygur in mocking Delaware Republican Senate nominee and the Tea Party as Uygur discussed O’Donnell’s recent comments about the words "separation of church and state" not being in the Consititution. After Uygur asked if the views of the Delaware Republican "speak poorly of the people who elected her, namely the Tea Party voters," Fineman agreed with Uygur’s negative view of the Tea Party and went on to trash Nevada Republican Senate nominee Sharron Angle as he contended that O’Donnell "makes Sharron Angle look like Doris Kearns Goodwin." Fineman:

Yeah, it probably doesn’t help the Tea Party at all. I mean, I suppose you could argue that having Christine O’Donnell around and speaking the way she did today makes Sharron Angle look like Doris Kearns Goodwin or something. But it, you know, that’s the only way she might be useful as a point of contrast. And what’s really killing here, what’s damning here is that the Tea Party is run in the name of rights and freedom. And all of those rights and freedoms are enshrined in the very amendments that she seems totally ignorant of.

New York Times readers were greeted Sunday morning by the American Left's new feminism wherein it's not only acceptable to demean conservative women, it's desirable.

The architect of this truly bizarre neo-feminism, Ms. Maureen Dowd, proudly wrote in her October 17 column, "We are in the era of Republican Mean Girls, grown-up versions of those teenage tormentors who would steal your boyfriend, spray-paint your locker and, just for good measure, spread rumors that you were pregnant":

During the "New Rules" segment of HBO's "Real Time" concerning this disgusting matter, Maher said it demonstrated "how pathetic and clueless white American males have become because the kind of guy who thinks there are women out there who just cold want to see your c--k is the same kind of guy who thinks Sarah Palin is swell and tax cuts pay for themselves."