Gayle King forwarded the agenda of the cultural left on Wednesday's CBS This Morning as she interviewed country music artist Chely Wright, an open homosexual. The Obama-supporting anchor targeted the country music industry for supposedly giving Wright the cold shoulder: "I'm a little disappointed and surprised by the reaction of the country music industry....they do seem, Chely, to have rejected you, ever since you came out."

King also gave an enthusiastic thumbs-up the musician's new documentary about her "coming out process." The CBS personality gushed, "Chely Wright, I have to say, your documentary took my heart and ripped it out a couple times when I was watching you." 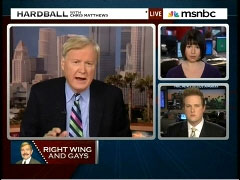 Liberals are circulating the idea the God is pro-gay. Near the end of Monday night's Hardball, after a segment on gays, Chris Matthews tossed in his not-so-Catholic two cents: "I don't think your orientation is a choice, by the way. God has a lot to do with this.  Anyway, Michelle Goldberg, thank you. Charles Moran, sir, I love your organization." That group would be the Log Cabin Republicans. When Matthews loves you, you must be Republicans in name only.

The same theme came up in a Rosie O'Donnell satellite-radio interview on Friday with newly declared lesbian country singer Chely Wright, who declared: "I think God wanted me to [have a singing career], and I also think that God has been whispering in my ear for a very long time to come out as a lesbian...and I continued to override God and say, 'God...you [don't] quite understand Nashville. Let me handle this.'"

On her coming-out interview on the May 5 Today, NBC interviewer Natalie Morales offered her an enthusiastic endorsement of her decision and drew out of her how God apparently just wanted her to "tell the truth" about her choices: